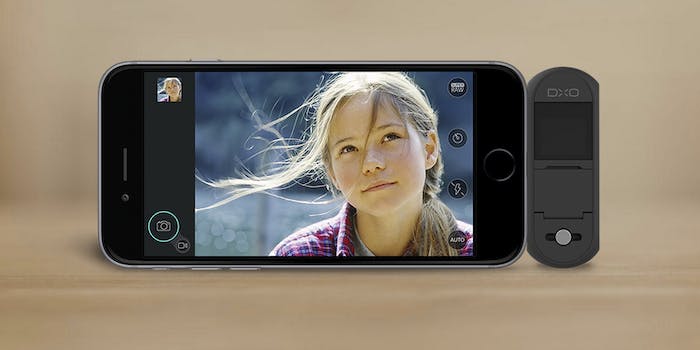 This little gizmo turns your iPhone into a camera powerhouse

The iPhone is already the most popular camera in the world, but it falls short for many photography enthusiasts who demand the power that a DSLR offers. Now, those photo buffs can have the best of both worlds, thanks to the DxO ONE, an iPhone accessory that adds a few ounces of weight and a 20.2-megapixel sensor.

The ONE’s 6-element lens offers more freedom and features when compared to the iPhone’s default sensor, with various modes for all types of lighting conditions and locations. The unit works in concert with the DxO’s dedicated iOS app, which adds its own suite of controls and options like aperture tweaks and shutter speed. In addition to RAW photo capability, the device’s video capture mode that can record in either 1080p at 30fps or 720p at 120fps.

In short, DxO’s fancy little super camera makes the iPhone and even more capable photography device with features that rival those of the DSLR crowd, but it does so with a significant cost. The ONE is currently available for pre-order at a price of $599.

That’s a price tag that rivals that of the iPhone 6 itself, so it will undoubtedly be a hard sell for casual shutterbugs, though if the photo quality is as spectacular as DxO claims, it might be a nice half-way point for those mulling the purchase of a much more expensive camera.

The ONE camera will be compatible with iPhone 5 and later, as well as all iPad Air, 4th generation iPad, and iPad mini 2 and later.