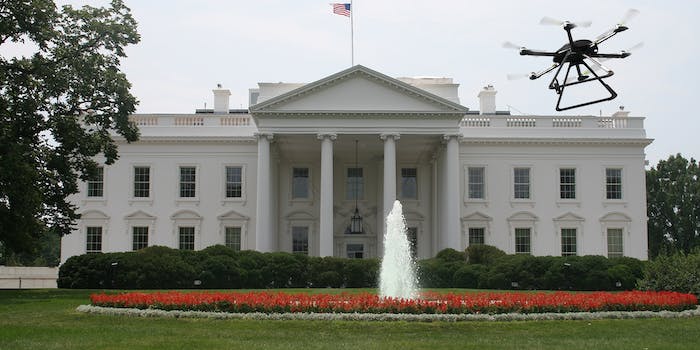 Someone crashed a drone on the White House lawn

Some jackass decided to fly a small drone near the White House on Monday morning and crashed it on the lawn.

The drone, originally described by the U.S. Secret Service as a mysterious “device,” landed inside the executive mansion’s secure perimeter around 3am ET Monday morning, federal law enforcement officials told CNN. White House Press Secretary John Earnest, traveling with President Obama in India, confirmed the incident but said the drone did not appear to pose a threat.

The drone intrusion is just the latest in a series of security breaches at the White House. Most notably, a knife-wielding Texas man was able to proceed far inside the presidential residence last September. The incident further shook public confidence in the Secret Service, forcing then-Director Julia Pierson to resign.

It is illegal to fly personal drones, which are often equipped with cameras, within Washington, D.C., limits. In addition, a flight restriction implemented after the September 11, 2001, terrorist attacks severely limits all air traffic over the nation’s capital.

In most of the U.S., however, Federal Aviation Administration guidelines allow the use of personal drones, also known as unmanned aerial vehicles (UAVs), as long as the pilot keeps the vehicle below 400 feet, maintains a line of sight, and doesn’t crash it near the freaking White House.

Update 4:03pm CT, Jan. 26: The person who crashed the drone did so accidentally and reported the incident to the Secret Service, the agency has said. The individual is cooperating with investigators. Meanwhile, here is a photo of the offending copter.

JUST IN – photo of the drone that crashed on the White House grounds overnight pic.twitter.com/8wnOiKQlRi

Update 3:45pm ET, Jan. 27: The person who crashed the drone was an employee at a “government intelligence agency,” the New York Times reports. Yes, he was drunk at the time.