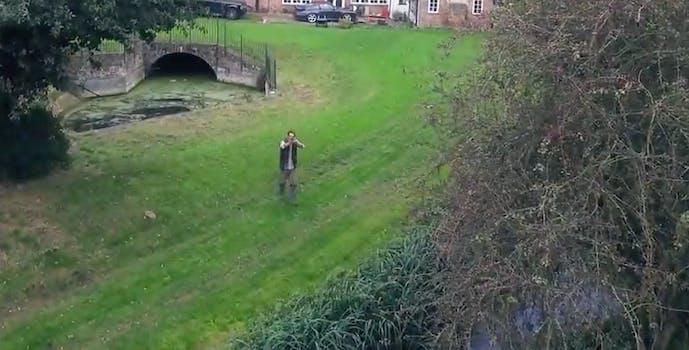 This video of a homeowner shooting down a drone is righteous—but is it real?

There are a few red flags.

Drones are absolutely everywhere these days, but not everyone is OK with it. A video has been making the rounds that appears to show one homeowner who is just plain fed up with the creepy flying cameras and takes matters into his own hands.

But is the clip an epic display of privacy activism or a well-crafted hoax?

The video is fairly straightforward: A low-flying drone is creeping along a stream with a home in the background when a man appears, running towards the device. He throws his hat down and raises a shotgun, quickly fires once, and the drone takes a tumble.

At first glance, everything appears to be legit, but if you watch it a few times you’ll start to question whether or not it’s real. There are definitely a few red flags here:

First, the scene is almost too perfect. The drone seems to have just taken off or at the very least is flying so low that it’s in perfect view of anyone who might want to do it harm. It feels staged.

Second, the shotgun—you can tell it’s almost certainly shotgun and not a rifle because of its break-action—appears to produce virtually zero recoil. The flash of the shot in the barrel also looks comically fake, as though it were added to the frames after the fact. On top of that, the drone doesn’t react as though it’s been shot; there is no immediate impact, it simply starts spinning and crashes into a tree and then the ground.

Third, and perhaps most damning, is the obvious editing of the video. It’s not one continuous clip, but at least two and perhaps more stitched together. When the man first walks up, he throws his hat:

He clearly has no hat on when he fires the shot: 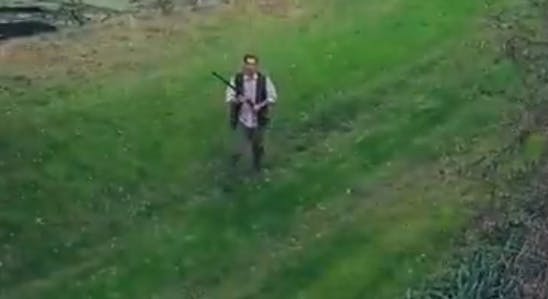 But just a second later, after the shot is fired and the drone starts to “fall,” the camera captures him again for just a few frames. Suddenly, he has his hat on again, despite having thrown it several yards away just a half second earlier: 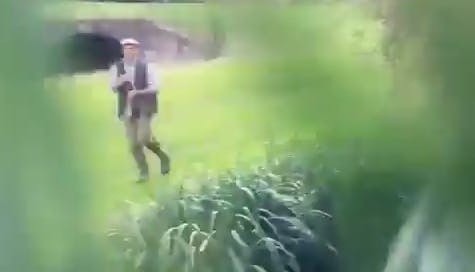 So what’s the deal? As convincing as the video seems from the outset, there’s just too much evidence here that says otherwise.

Of course, there are plenty of homeowners who really have shot down drones, if you’re looking for someone to cheer for.