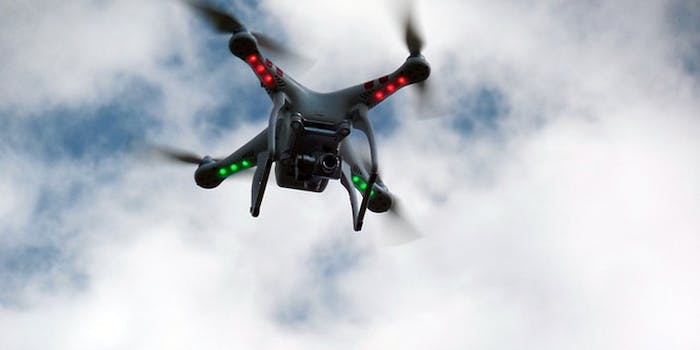 Seriously, this is why we can't have nice things.

Listen, I get it, drones are awesome. The small, unmanned, remote-control flying vehicles can do everything from controlling giant marionettes at Disneyland to filming startlingly majestic pornography. But, if the American people want to be able to do really cool stuff with drones, like racing them through empty parking garages, they’re going to have to prove they’re responsible enough not to also do really dumb stuff with them all the time.

One practice our nation’s legion of drone enthusiasts might want to stop doing is flying drones near airports.

According to an investigation published on Wednesday by the Associated Press, drone sightings near airports and areas where manned civilian and government aircraft operate are reported to the Federal Aviation Administration (FAA) on a near daily basis. This frequency is a significant spike from a couple years ago, when such sightings were an uncommon occurrence.

An errant drone that collides with an airplane could do serious damage, potentially knocking the plane, and all of the passengers inside it, out of the air. Most drones flown by American hobbyists are small enough that they don’t show up on radar—making them significantly more difficult to spot.

“It should not be a matter of luck that keeps an airplane and a drone apart,” former Air Line Pilots Association safety committee chairman Rory Kay told the AP. “So far we’ve been lucky.”

In New York City alone, there has been a string of near misses between drones and airplanes in recent months. ABC News notes that there were 11 reports of close calls in just a 30-day period this summer.

Drone laws in the United States are already a bit of a confusing mess and much of that is because it’s difficult for the FAA to get a handle on how people will do dumb stuff with ever-evolving drone technology. And to do so long enough to effectively develop a concrete set of regulations.

Right now, non-commercial drone use is permitted in the U.S. as long as operators keep their drones within their line of sight and within 400 feet of the ground. Drone operators are also prohibited from flying near airports, military bases, national parks, and pretty much anywhere in Washington, D.C..

Commercial drone use has been prohibited by the FAA since 2007, while the agency works on developing a more permanent set of rules for operation that could possibly include some kind of licensing system for drone pilots. Those rules have been repeatedly delayed and, even though Congress lit a fire under the agency to put something out soon, the delays keep piling up.

Airports aren’t the only places where irresponsible drone operators keep showing up. The Washington Post recently reported that the FAA is investigating a rash of drone flyovers at NFL and college football games.

The problem with letting drones fly over crowded public events like football games is what happens if the aircraft crashes into something—a human being, for example.

While drones are usually relatively small and lightweight, they can still do serious damage. Last year, a New York City teenager was partially decapitated when he lost control of the drone helicopter he was piloting. Earlier this year, an Australian triathlete was hospitalized after being hit in the head with a drone by a photographer who was filming the race.

The moral of this story is pretty simple: drone safely or don’t drone at all.