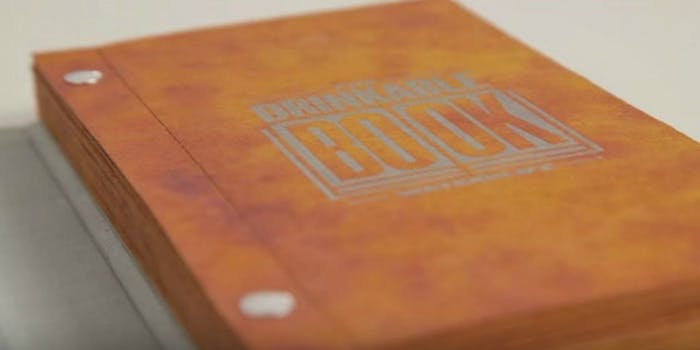 Revolutionary ‘drinkable book’ is made of pages that can purify water

More than 750 million people around the world don't have access to clean water.

In what could be one of the most electrifying innovations in recent memory, a researcher at Carnegie Mellon University has developed a book that can purify water.

Theresa Dankovich, who began her research as a PhD candidate in chemistry while at Montreal’s McGill University, developed a piece of paper that is “infused with bacteria-killing silver nanoparticles” that release silver ions, which then deactivates “disease-causing microbes” that approach them.

Dankovich, with the help of the Water is Life group, compiled those pages into The Drinkable Book, which wipes out most of the bacteria that causes typhoid, cholera, hepatitis, and E. coli. The purification system also apparently doesn’t cause the water to taste strange.

“The main thing is that it would fit in someone’s normal life without requiring massive changes to adopt such a technology,” Dankovich told Smithsonian magazine.

The book and its pages could produce huge changes for humans around the world who don’t have access to clean water. According to water.org, that’s nearly 770 million people worldwide.

The book seems rather simple to use: tear out a single filter that lasts 30 days (and that features an educational message about water safety), slide it into the custom filter box, and pour water on top. The water that filters through is immediately safe to drink.

One book would provide clean water for one person for up to four years.

The system, though, isn’t perfect—it can only filter out bacteria.

“I would want to see results for protozoa and viruses,” Tufts University environmental engineer Dr. Daniele Lantagne told the BBC. “This is promising but it’s not going to save the world tomorrow. They’ve completed an important step, and there are more to go through.”