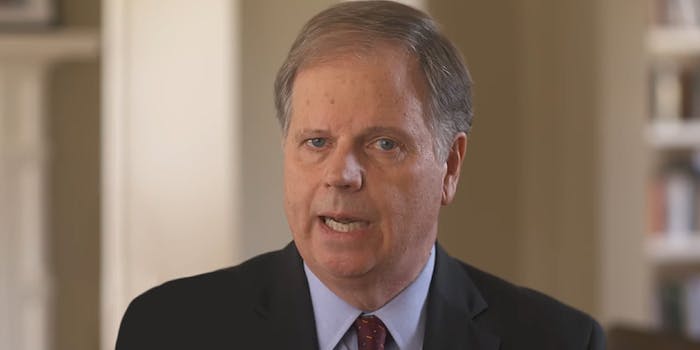 The victory would have been impossible just weeks ago.

Jones’ victory in the deeply red state—which broke 62 percent for President Trump in 2016—comes as a fractured Republican party struggles to deal with accusations of sexual misconduct by some of its members and the president’s floundering domestic agenda.

A Republican was expected to cruise to an easy victory in the election to replace Attorney General Jeff Sessions, but the party’s primary revealed a schism. Trump endorsed Sen. Luther Strange, who had been appointed to replace Sessions until the election, while Trump’s former campaign manager and White House counselor Steve Bannon broke for Moore.

Moore won the primary, but his campaign collapsed under reports of inappropriate and illegal sexual contact with minors in the weeks leading up to the election. Many Republicans disavowed Moore as allegations mounted, but he received new life when the president spoke out in support of Moore.

Jones heads to a Senate that Republicans have a precarious grip on. Their tax reform bill passed by a 51-49 vote after Sen. Bob Corker (R-Tenn.) broke with his party over concerns it would add to the deficit.

The bill currently is on its way to reconciliation with the House and must pass the Senate again. Sen. Susan Collins (R-Maine), has wavered in her support of the bill in both its current and revised form, and with Jones going to Washington, the bill is not assured to make it to Trump’s desk.

The last Democrat to serve the state of Alabama in the Senate is actually still serving in the Senate today. Sen. Richard Shelby was elected in 1992 as a Democrat before switching allegiances to the Republican party in 1994.