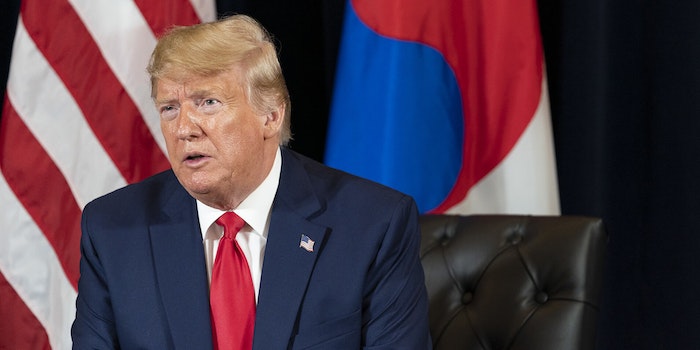 Trump was reportedly railing against the whistleblower complaint.

President Donald Trump on Thursday railed against the people who spoke to a whistleblower who submitted a complaint against him, saying that those who did were “almost a spy.”

The Los Angeles Times reports that Trump made the remarks during a private event in New York. The New York Times also reported on Trump’s remarks.

On Thursday, the nine-page whistleblower complaint, which was lightly redacted, was made public. In it, the whistleblower said they believed Trump was using “the power of his office to solicit interference from a foreign country in the 2020 U.S. election” and outlined a phone call the president had with Ukrainian President Volodymyr Zelensky.

Within the complaint, the whistleblower says they spoke to White House officials who relayed information to them.  The complaint, and a memorandum released by the White House, have become the center of an impeachment call among Democrats.

Trump appeared not to be pleased with the whistleblower’s report.

“I want to know who’s the person, who’s the person who gave the whistleblower the information? Because that’s close to a spy,” he continued. “You know what we used to do in the old days when we were smart? Right? The spies and treason, we used to handle it a little differently than we do now.”

NEW: Trump rips the whistle-blower at a private meeting with UN staff: "They're almost a spy."

"Who gave the whistle-blower the information? Because that's close to a spy."https://t.co/8OLSxoRbzD

The U.S. has killed spies before, most infamously Julius and Ethel Rosenberg, who were executed by the federal government for espionage.