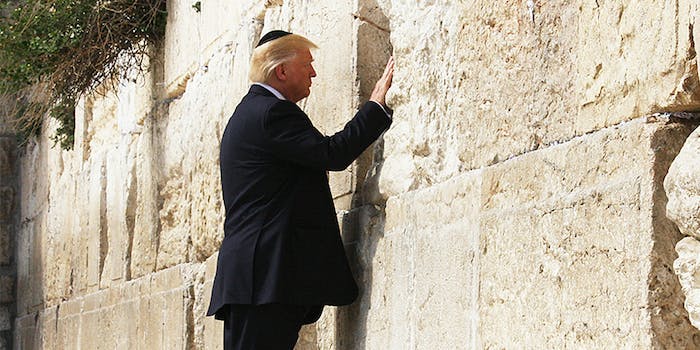 ‘The Faith of Donald Trump’: Reviewing the president’s spiritual biography

They take lots of leaps of faith.

Thou shalt not bear false witness.

Even the heathens among us know this as one of the 10 Commandment. If God is really serious about that one, then David Brody and Scott Lamb, authors of The Faith of Donald J. Trump, A Spiritual Biography, ought to be worried. This book, which purports to be a chronicle of Trump’s spiritual life, is written with an amazing combination of wishful thinking, irrelevant information presented without context, and total B.S.

Even a non-religious person can appreciate the idea of a spiritual biography, the story of significant events, people, and places that have influenced your relationship with God. In some ways, it is the story of one’s life, and in other ways it is like mapping a river of faith, charting the intellectual and spiritual tributaries that feed in one’s view of the world.

Spiritual biography can be incredibly compelling. St. Augustine’s Confessions, the story of his journey from the depths of sin to righteousness and the most famous spiritual autobiography of all time, has inspired millions of people. It also gave us one of the best punchlines of all time, “Lord make me chaste—but not yet.”

In The Faith of Donald J. Trump, Brody and Lamb attempt to write a spiritual biography of a man who has shown no interest in religion at any point in his life. In one sense, the book is actually quite impressive. Never has so much religious fodder been made out of so little.

The book is broken into two sections. The first attempts to construct the religious influences on President Trump’s life, spinning grand stories out of the slightest threads with quotes like this:

“Being born in a garage doesn’t make you a car. And being raised in a church with a rich history of vibrant biblical Christianity and sacrificial love for America makes you neither a patriot nor a Christian. But the fact that, in centuries past, so many of these people worshipped God in the same congregation in which Donald Trump would spend his childhood and teen years means that he grew up in proximity to these stories of ‘men with chests.’”

The second, equally ridiculous, section of the book, offers an account of Trump’s campaign and early presidency as a kind of spiritual journey. Here the authors offer excuse after excuse for his bad behavior and make the cyclical “Who’s on First”-style argument that Trump is religious because he spends time around pastors, and because he spends time around pastors, he must be religious.

Here is their attempt at justifying the Access Hollywood tape:

“Wallnau argued that when Trump married Melania, he ‘decided that he was going to judge the one area of his life that was out of control. The guy doesn’t drink, he doesn’t smoke—but he was a womanizer billionaire. And he ended that. He got committed to Melania, and he’s been dedicated to her and to having a rebranded family image ever since then…the Lord wanted to circumcise him. He wanted to cut away from him any basis for boasting that it was his own strength. He got into the White House by the grace of God, not because of a perfect campaign—because that Access Hollywood thing would have torpedoed anyone other than someone God’s grace was on.’”

These two quotes are just a taste of the kind of spiritual gymnastics that the authors resort to in The Faith of Donald Trump. It would be hilarious, if it all wasn’t so cynical. Evangelicals voted 80 percent with Donald Trump. The bargain was that they would swallow the behavior of the boorish reality show host in exchange for advancing their pet policies: bans on abortion, bans on gay marriage, prayer in schools.

But Trump doesn’t really care about those issue, and Trump has not changed his behavior one bit. In light of allegations from Stormy Daniels and various other women that have surfaced since the book was published, it’s hard to look at his biography and see a journey towards righteousness.

While no one deserves to have to read this book without being paid, there are some choice quotes that are worth looking at for the hilarious depth of the authors’ cynicism. Here are the best of the bunch, broken down into the two sections, the biography (It’s okay because…) and the apologetics (It’s actually good that…).

May God have mercy on your soul.

The argument is that because Trump’s father came from Germany, the home of Protestant reformer Martin Luther, and his mother came from Scotland, where the Presbyterianism of John Knox first flowered, he is somehow religious by osmosis. There is are also long digressions about the film Highlander and the Hindenburg disaster for some reason.

“All that to say there’s a good chance that Donald Trump, being a ‘son of Leod,’ has Viking blood running through his veins.”

They also support him because he’s a baby boomer.

“What I really, really like about [Trump] is that he has 1950s sensibilities. By that I mean he really does believe in a strong America because he grew up being proud of the United States—’a John Wayne America.’”

It’s okay because his family attended a historic church

From there, we go to the New World, where, as in every other aspect of his life, Trump is given immense credit for things he was born into. Brody and Lamb argue that Trump must have picked up some religious faith simply by proximity. They even go as far as to describe some of the books he could have read in the church library, had he decided to.

“If young Donald Trump picked this volume up off the shelf of his church library, then he would have opened to the first chapter, ‘Why Presbyterians Left England and What They Found in Jamaica’—with its gruesome anecdote about the torture of Leighton, printed on the first pages of the book.”

It’s okay because Donald Trump owns a lot of Bibles

Speaking of books, did you know that The Donald has been given a lot of Bibles? And would you believe it, he’s never even thrown them away?

“Donald Trump has been given hundreds of Bibles by well-wishers over the years. During our first interview, he told me how he keeps them in a very nice place inside Trump Tower. ‘There’s no way I would ever . . . do anything negative to a Bible. . . . I would have a fear of doing something other than very positive.’” 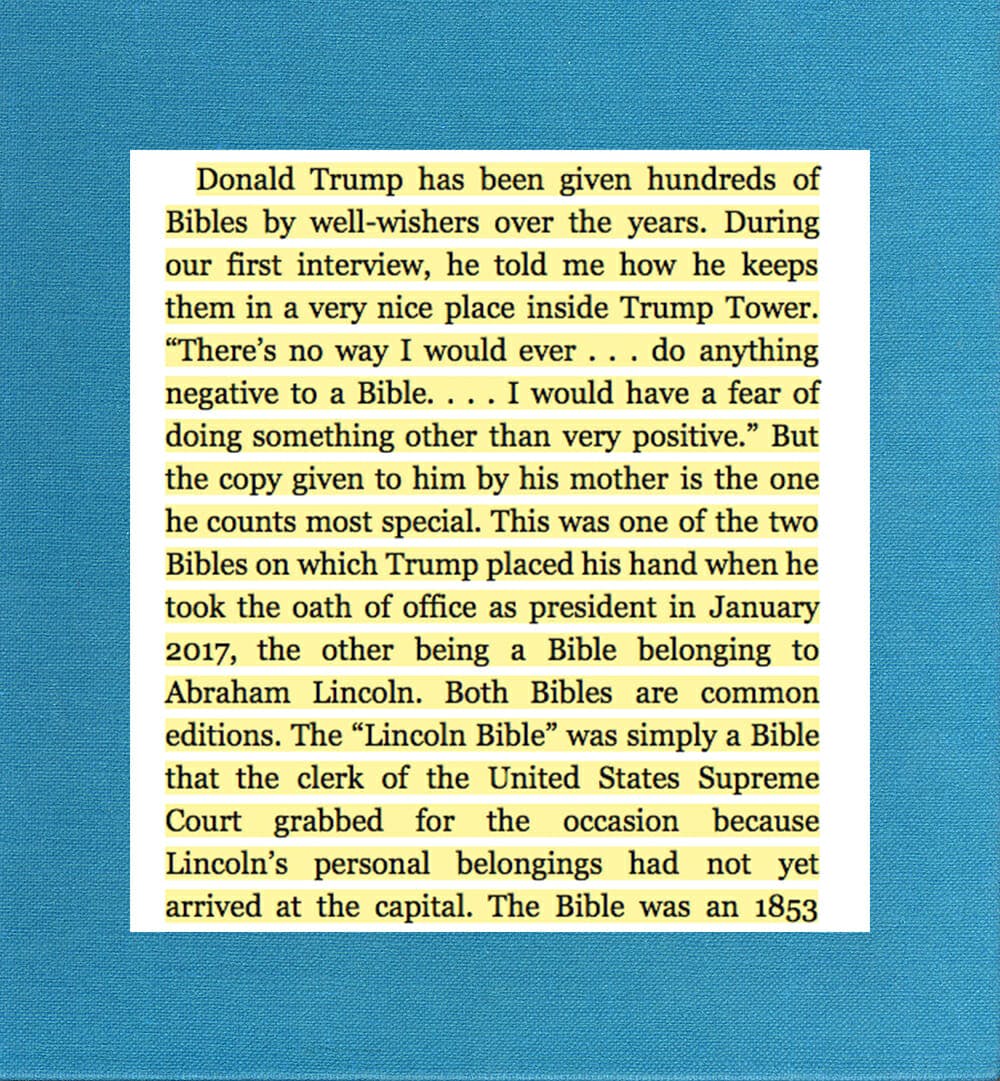 As we start to get closer to present day, the authors begin to recognize that they have to deal with the actual biographical details of President Trump, instead of just musing about his gene pool. Brody and Lamb have to contend with Trump’s well-documented greed, adultery, and arrogance. At least a little bit. The authors provide various justifications for Trump’s infidelity.

And one involves the 1995 film, The Bridges of Madison County

“In 1995, Eastwood’s film adaptation of The Bridges of Madison County, about a four-day affair between an Iowa farmer’s wife and a traveling photographer, became one of the top-earning movies of the decade. To say the least, Bridges leaves the viewer wishing there could have been some way the farmwife might have been able to keep both her good husband and kids while also having the steamy romance with Eastwood’s character.”

They also discuss his dad’s death.

“Two of the most formative real-world father figures in Donald’s life—Fred and [Norman Vincent] Peale—had over one hundred twenty years of married life between them. Peale died in 1993, the same year as Fred’s diagnosis. It almost seems as though when Trump lost the older generation, he responded by returning to a ‘sow some wild oats’ mindset of adolescence. But this was not to be the final chapter written about Trump’s marital relationships.”

Trump was 47 years-old when his dad died.

Now, we fast forward to the last two years, following Trump on his journey from his campaign announcement to the White House. The authors spend a good chunk of time asserting friendship between Trump and various pastors and quoting his primary speeches. They also gloss over a number of Trump’s bigger problems by claiming they’ve been all too well documented elsewhere.

The best stuff, though, comes as the authors strain to explain away some of Trump’s biggest gaffes and scandals.

Trump stated that he has never sought forgiveness from God in July 2015. But that’s okay.

“Ironically, if the truth of the matter is that Trump has never asked God for forgiveness, then if Trump had lied and said “yes”—then he could have avoided criticism. That is, lying about his practice of confession would have kept him out of trouble with the piety-inspectors.”

Trump once not come up with a favorite Bible verse when asked in August 2015. Clearly that’s evidence he’s well read.

“What I found most interesting is that Trump still had no desire to take the easy road and simply memorize a couple of Bible verses for the next go-around with the “favorite verse” line of questioning. I had given him some of my favorite verses. A staffer could have come up with a few more, and even scripted some evangelicalish lines to sweeten the ears or stop the critics.”

“For what it’s worth, 2 Corinthians (Not Second) is pretty common British speak. Granted, Donald Trump is not from England.”

Why is it not a problem Trump rarely attends church?

“During his first [year], we know that Trump has rarely attended church. And while we know that going to church regularly is good for the soul and for building community with other believers, we also acknowledge that ultimately God measures a man’s heart, not his church attendance record. A lack of church attendance doesn’t necessarily translate into a lack of spiritual significance. We know he is constantly surrounded by evangelical leaders who pray with him and for him on a consistent basis.” 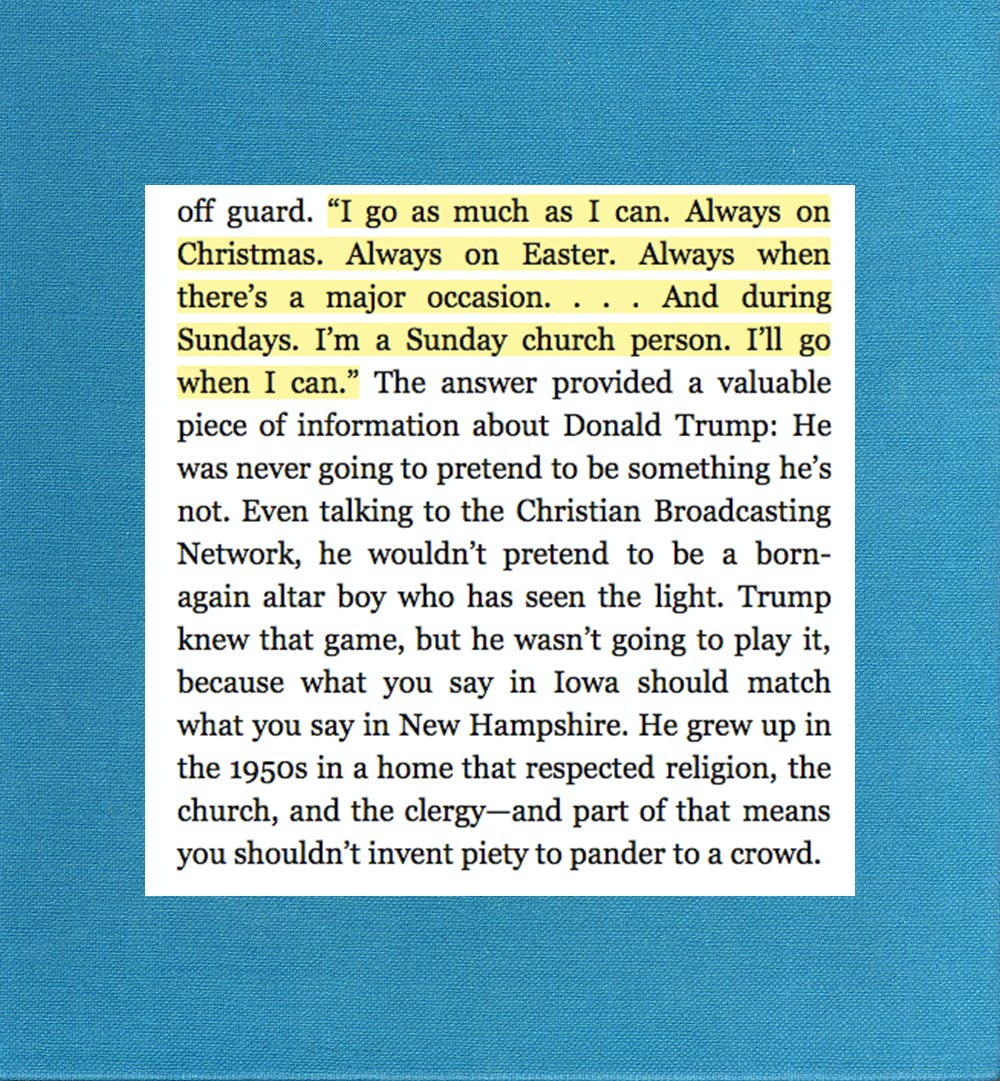 Finally, the authors kind of give up.

The last pages of the book complete the tragicomic experience of reading The Faith of Donald J. Trump: A Spiritual Biography, because after hundreds of pages, the writers finally admit that they don’t even believe what they’re writing.

“Abraham was old, Joseph was abused, Moses had a speech impediment, Samson was a womanizer, and don’t even get me started on King David! As for Donald Trump, clearly, God is using this man in ways millions of people could never imagine. But God knows and that’s good enough.”

But for everything in that book, nothing can top this.

“Driving through the streets of Riyadh, we saw immense signs over bridges proclaiming ‘Together We Prevail,’ with Trump’s mug alongside that of Saudi King Salman. The only thing more striking may have been seeing a good old-fashioned American restaurant, Buffalo Wild Wings, on the way to the hotel from the airport arrival ceremony. But unlike the calorie-laden Buffalo Wild Wings, what Trump would offer would be low in calories yet high in spiritual wisdom.”