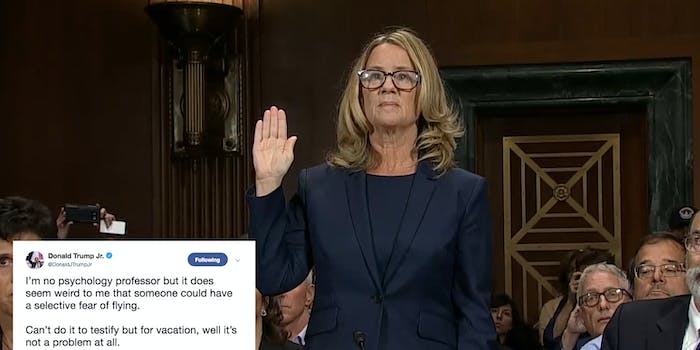 In lieu of questioning Dr. Christine Blasey Ford, who says Supreme Court nominee Brett Kavanaugh sexually assaulted her, the Republican senators on the Judiciary Committee handed over their questioning to an expert on prosecuting sex crimes, Rachel Mitchell. Mitchell’s question to Ford about airplanes has sparked bizarre and partisan responses from many online—including Donald Trump Jr.

Mitchell asked Ford if she said a “fear of flying” was why she refused to come to D.C. earlier to be questioned by the Senate Judiciary Committee in advance of the hearing. When Ford admitted to having a fear of flying and using that as a reason to not want to come to D.C. in advance, Mitchell, for some reason, repeatedly pressed her on why she used planes on other occasions, including to get to the hearing today.

As noted by everyone in the world, many people have a fear of flying like Ford and don’t take trips sometimes because of it. Also like Ford, they still use airplanes to travel long distances.

People who are afraid of flying fly all the time. They just tend not to do it on the barking orders of vicious men like Chuck Grassley and Mitch McConnell, to whom they owe nothing.

As someone who does not like to fly but flies a lot, this line of questioning feels pretty disingenuous. The two are not mutually exclusive

"I have a fear of flying"

"and yet you have used airplanes to travel extremely long distances" pic.twitter.com/HqcSTqSjVF

I have a fear of flying and I have to get on airplanes anyway because I HAVE NO CHOICE. What is the point of this line of questioning?

As with anything political, leading members of right-wing Twitter mobs found it unfathomable that Ford could be afraid of flying and still take a flight.

“I’m no psychology professor but it does seem weird to me that someone could have a selective fear of flying,” Trump Jr. tweeted. “Can’t do it to testify but for vacation, well it’s not a problem at all.”

I’m no psychology professor but it does seem weird to me that someone could have a selective fear of flying.

Can’t do it to testify but for vacation, well it’s not a problem at all.

Trump Jr. overlooked something in his tweet, however: While Ford didn’t take a plane to be questioned, at the beginning of the line of questioning she was asked if she took a plane to get to D.C. today, to testify.