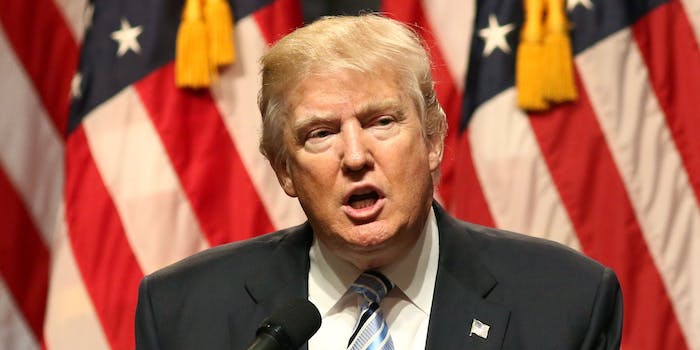 'There is a greater desire to sort of clear the decks.'

The Donald J. Trump Foundation, the president-elect’s nonprofit organization that has been the source of so much controversy during his campaign and his transition to the presidency, is in the process of being dissolved, the New York Times reported.

This news comes as critics continue to blast Trump for his plethora of business conflicts and less than three months after New York’s attorney general sent a cease-and-desist letter for the foundation to stop raising money because it allegedly was doing so without the proper certification.

Other potential conflicts of interest include the Washington hotel Trump recently opened and the apparent lease violation that will occur as soon as he takes the oath of office and the fact Trump will remain an executive producer on the Celebrity Apprentice. Those are but two of the reasons a former Hillary Clinton staffer recently created the Trump Corrupt AF website.

Trump has said his conflicts of interest aren’t a big deal.

But as the Times reports, “Trump and his family are rushing to resolve potential controversies” ahead of his Jan. 20 inauguration date. Trump reportedly has said he will distribute his foundation’s assets and then shut it down and that he will hire an outside organization to oversee the entire Trump organization.

This newest report comes only a day after the Eric Trump Foundation suspended its operations after questions were raised about whether donors would get special access to his father and other first family members.

My wonderful son, Eric, will no longer be allowed to raise money for children with cancer because of a possible conflict of interest with…

my presidency. Isn't this a ridiculous shame? He loves these kids, has raised millions of dollars for them, and now must stop. Wrong answer!

While this is perhaps one step forward in untangling Trump’s web of potential business conflicts, he so far has refused the idea of liquidating all of his holdings and putting them into a blind trust. Trump hasn’t publicly stated he’s concerned about those conflicts, but Trump Organization General Counsel Alen Garten told the Times, “I certainly can’t deny there is a greater desire to sort of clear the decks as much as possible to avoid distractions.”

The Trump transition team did not immediately respond to a Daily Dot request for comment.

But here’s a roadblock for Trump. This, from the press secretary of the New York attorney general.