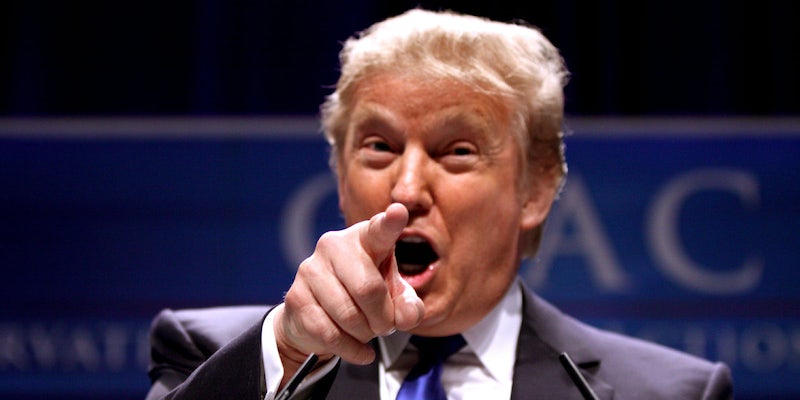 This comes a day after the Tax Day protests.

The day after U.S. tax day (but still two days before taxes are actually due to the IRS), President Donald Trump had a couple of questions for his Twitter followers on Sunday morning. The main subject: Why do people still care about the fact he never followed through on his promise to release his taxes?

I did what was an almost an impossible thing to do for a Republican-easily won the Electoral College! Now Tax Returns are brought up again?

Someone should look into who paid for the small organized rallies yesterday. The election is over!

Yes, people are still upset about his refusal to release his taxes, and on Saturday, many across the country marched in protest. As ABC News points out, thousands of citizens from Los Angeles to New York demanded that he be transparent with his financial history.

There was also a violent clash Saturday in Berkeley, California, in which pro-Trump supporters planned a “Patriot Day” rally but were met by ant-Trump protesters. At least a dozen people were reportedly arrested.

JUST IN: 12 people have been arrested as pro and anti-Trump protestors clash in Berkeley, California https://t.co/LDmsv9Ie76 pic.twitter.com/jAbhnh46aB

Trump on Sunday also tweeted his thoughts about China—the country he had previously called a currency manipulator—and U.S. military strength.

Why would I call China a currency manipulator when they are working with us on the North Korean problem? We will see what happens!

Our military is building and is rapidly becoming stronger than ever before. Frankly, we have no choice!

Oh, and in case you thought he forgot Sunday was one of the most important religious holidays of the year…

Happy Easter to everyone!