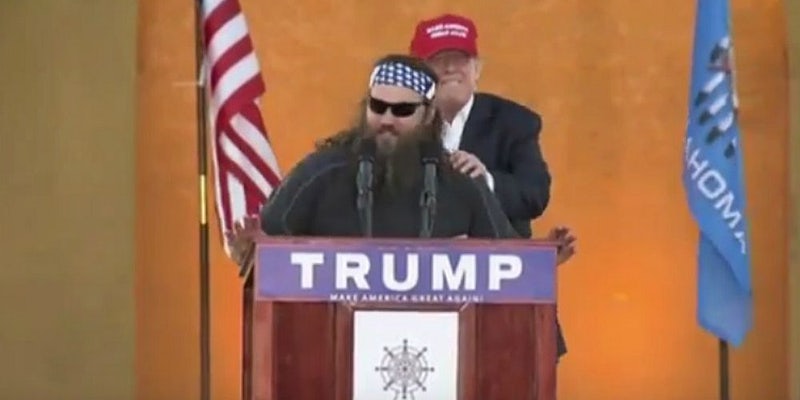 Yes, but how will Willie Robertson's beard vote?

Duck Dynasty might have a new favorite presidential candidate. And the old favorite, the man who governs the state in which the A&E reality stars live, still doesn’t seem worried about what’s happening.

During the weekend, Donald Trump invited Duck Dynasty star Willie Robertson to the stage at a rally in Oklahoma. Trump simply needed to know what Robertson thought of the Republican presidential poll leader. Even though Robertson had previously pledged his support to Louisiana Gov. Bobby Jindal, Robertson admitted to a Trump intoxication.

Watch the beardy lovefest below, via the Hill.

If you think this was an accidental encounter, let us to introduce you to the cover photo on the low-polling Jindal’s Twitter account.

See that dude in the middle with the white jacket holding some kind of plaque to the right of the smiling Jindal? Yeah, that’s the same guy who just said he loved him some Trump.

And the (possible) reason Trump made such a big show of bringing over Robertson to the microphone so he could compliment Trump? These tweets, all of which have been written in the eight hours prior to this writing.

Donald Trump: “The government's gonna pay for it.” https://t.co/C6bsqwcd8P

Trump agrees with Obama and Clinton on the need for socialized medicine and a government takeover of health care: https://t.co/ePGGeKKn5T

'Trumpcare’ – Government dependence for all: https://t.co/ePGGeKKn5T

For now, it appears Jindal will retain the duck-hunting support in his fledgling run for president—a Jindal spokesman told the Hill that Robertson spoke with Jindal this past weekend and still supports the Louisiana governor. But if he falters, Trump seemingly already has dibs on picking up Robertson’s support.

Unless, of course, Trump is one of those STD-causing hippies and hasn’t told anybody about it yet.

H/T The Hill | Screengrab via Right Side Radio/YouTube