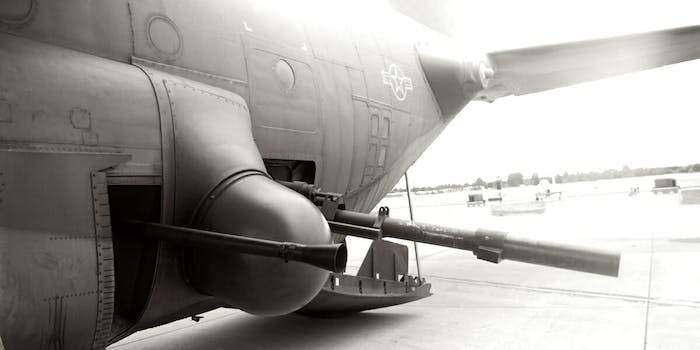 Photo by Clemens Vasters/Flickr (CC BY 2.0) | Remix by Dell Cameron

American troops in Afghanistan may have violated the U.S. military’s rules of engagement when they ordered an airstrike killing 22 people and decimating a Doctors Without Borders hospital in Kunduz.

It remains unclear whether the U.S. Special Operations unit on the ground knew they were putting a medical facility at risk when they ordered the attack from an AC-130 gunship.

Speaking before a Senate committee on Tuesday, Gen. John Campbell, the unit’s commander, was straightforward about who is ultimately culpable: “To be clear, the decision to provide [airstrikes] was a U.S. decision, made within the U.S. chain of command,” he said.

The hospital had been “mistaken[ly] struck,” Campbell said, adding that the U.S. military would never intentionally target “a protected medical facility.” The general was not forthcoming about where in the chain of command the “mistake” occurred. He has reportedly ordered every U.S. service member in Afghanistan to be retrained on the “operational authorities and rules of engagement.”

A U.S. Army colonel, who was authorized to speak on behalf of U.S. forces in Afghanistan, initially described the attack as having occurred in the fog of war—the hospital was the “collateral damage,” he said, of an operation “against individuals threatening the force.”

According to Campbell, the unit that request the attack “was in close proximity” to the hospital at the time.

“When we make a mistake, we’re honest about it, we own up to it, we apologize where necessary as the president did in this case,” Earnest said. “We implement the kinds of changes that make it less likely that those kinds of mistakes will occur in the future.”

MSF has, however, already issued an explicit response to the U.S. government’s apologies: “Enough. Even war has rules.”

“It is unacceptable that the bombing of a hospital and the killing of staff and patients can be dismissed as collateral damage or brushed aside as a mistake,” Joanne Liu, president of MSF, said at a news conference Wednesday in Geneva. “This was not just an attack on our hospital. It was an attack on the Geneva Conventions. This cannot be tolerated.”

In an Oct. 4 statement, MSF General Director Christopher Stokes said Afghanistan authorities stated that Afghan and U.S. forces decided to “raze to the ground” the hospital because “members of the Taliban were present.”

“This amounts to an admission of a war crime,” Stokes said. “This utterly contradicts the initial attempts of the U.S. government to minimize the attack as ‘collateral damage.’”

Ten patients, including three children, and 12 MSF staff members were killed in the Oct. 3 attack.

The hospital was repeatedly & precisely hit during each aerial raid, while the rest of the compound was left mostly untouched #Kunduz

.@MSF asks the States Parties to the #IHFFC to activate an #IndependentInvestigation into the #Kunduz bombing. pic.twitter.com/963RbRayeG

Under the hashtag #IndependentInvestigation, MSF is calling for an investigation by the International Humanitarian Fact-Finding Commission (IHFFC), a never-used body established nearly 25 years ago to investigate violations of international humanitarian law.

To activate, the commission requires one of the 76 signatory states to request an inquiry. The state requesting the investigation does not have to be a party to the incident.

“Governments up to now have been too polite or afraid to set a precedent,” MSF said in its statement. “The tool exists and it is time it is activated.”

Photo by Clemens Vasters/Flickr (CC BY 2.0) | Remix by Dell Cameron