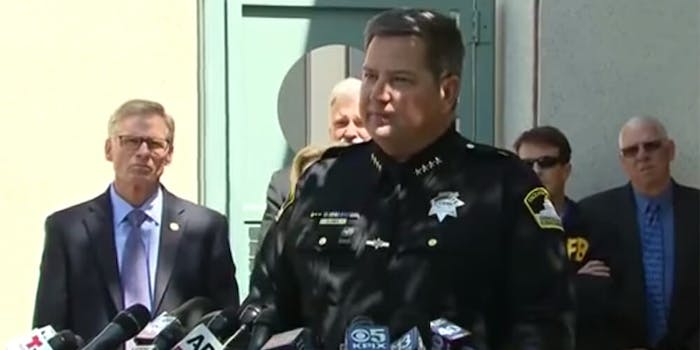 The most popular sites denied involvement.

Investigators revealed on Thursday that their big break in the Golden State Killer case came from DNA evidence linked to information on genealogical websites, the Los Angeles Times reported.

The Golden State Killer was responsible for the murders of 12 people and raping dozens more in the 1970s and ’80s in California, but authorities for years only had a string of DNA found at some of the cases to work from. A spokesman for the Sacramento County Sheriff’s Department told the Times that officials had for years failed to find a way to identify whom the DNA belonged to.

But recently, officials were able to tap public genealogical search sites that people use to search for relatives and their ancestry. Per the Times:

After investigating several families listed in the databases, investigators were able to focus on a pool of about 100 men who fit the age profile of the killer, said the sources, who spoke on the condition of anonymity.

Officials did not identify the specific website used or detail how exactly the match was found. Popular DNA sites Ancestry.com, 23andme, and MyHeritage all denied that law enforcement formally approached them about the Golden State Killer case.

Law enforcement’s search for a suspect eventually led them to 72-year-old Joseph James DeAngelo, an ex-cop who was arrested Wednesday in his California home. A member of DeAngelo’s family probably used the site where the DNA match was made, said Ruth Dickover, director of UC Davis’ forensic science program.

It’s not the first time law enforcement has traced suspects using commercial ancestry registries, and while some critics have claimed the practice is illegal, oftentimes the sites’ abilities to disclose personal information is in the fine print.

“I think people get excited about the service and the potential for what the service officers,” said Olu Orange, an adjunct assistant professor at USC and expert on DNA evidence. But “their privacy is out the window as soon as they send that DNA in.”

The Golden State Killer is believed to be responsible for dozens of home invasions, 51 sexual assaults, and 12 murders from 1976 to 1986.