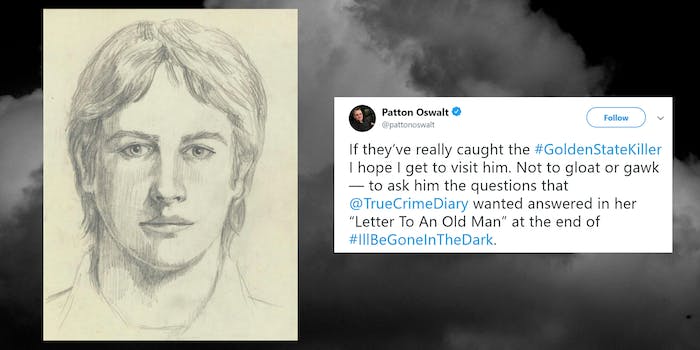 A suspect has been arrested in the Golden State Killer case

On Wednesday it was announced that there might have been a break in the 40-year-old Golden State Killer case, which was explored in the late Michelle McNamara’s recently published book I’ll Be Gone in the Dark.

According to the Sacramento Bee, 72-year-old Joseph James DeAngelo was arrested early Wednesday morning at his Citrus Heights home on two counts of murder. The Golden State Killer, who is also thought to be the East Area Rapist and the Original Night Stalker, is believed to be responsible for a string of home invasions, 51 sexual assaults, and 12 murders in and around Sacramento, the Bay Area, and Southern California from 1976-1986.

After McNamara passed away in April 2016, researchers Billy Jensen and Paul Haynes, as well as McNamara’s husband, Patton Oswalt, helped finish the book, which was finally published in February. Oswalt tweeted out the news on Wednesday morning.

If they’ve really caught the #GoldenStateKiller I hope I get to visit him. Not to gloat or gawk — to ask him the questions that @TrueCrimeDiary wanted answered in her “Letter To An Old Man” at the end of #IllBeGoneInTheDark. pic.twitter.com/32EHSzBct5

According to Jensen, DeAngelo was at one point a police officer but was let go for shoplifting a hammer and dog repellent.

Dive association. Dog repellant. Hammer. And refuses a hearing after shoplifting charge. Just took his punishment and left the force so no one would look deeper. #GoldenStateKiller #michellemcnamara #IllBeGoneInTheDark #stepintothelight pic.twitter.com/TSqmFwtZb9

In her book, McNamara wrote a letter to the GSK, envisioning when he would finally be caught.

Authorities have not publicly confirmed that DeAngelo is the Golden State Killer.

Update 2:41pm CT, April 25: During a press conference on Wednesday afternoon, Sacramento County DA Anne Marie Schubert said DNA evidence was crucial in DeAngelo’s arrest, and praised its Crime Lab for using DNA to find the “needle in the haystack.”

DeAngelo’s DNA was linked to the murder of Brian and Katie Maggiore in 1978. Ventura County DA Gregory Totten spoke of capital murder charges in the 1980 murder of Lyman and Charlene Smith as well. Authorities did not elaborate on how his DNA was obtained, only that it was a “discarded” sample. DeAngelo was allegedly not considered a person of interest until six days ago.

Sacramento Sheriff Scott Jones said McNamara’s book did not lead to the arrest, but kept the case in the news.