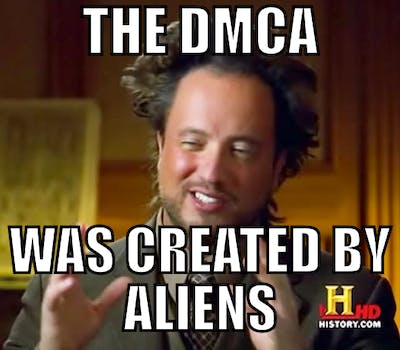 Google hit with a staggering 350,000 DMCA takedown requests every week

This is getting out of control.

According to a document released by Google on Thursday and updated Monday, the search engine now receives over 350,000 Digital Millenium Copyright Act (DMCA) takedown requests a week.

Under the DMCA, if a copyright holder spots a website illegitimately hosting their intellectual property, he or she can send a notice to Google to remove it from search results. It’s a checks and balances system: Google will comply, but the owner of that site has the opportunity to appeal.

It’s also an imperfect system, one that’s criticized by every party it affects. For large copyright holders, it’s easy for someone to post that same material with a different URL. For small content creators, it’s easy to be misidentified as falsely violating copyright, and the appeals process doesn’t always work.

And there’s a consistently rising glut of new takedown requests. The current rate is more than twice what it was last year. The most frequent issuer is Microsoft, which sent a staggering 94,415 requests just in the week beginning May 21, most of which target file sharing sites.

Of the 20 companies that issue the most DMCA requests to Google, most of the rest are entertainment companies fighting piracy: Music (the Recording Industry Association of America, British Phonographic Industry, Sony Music), TV and movies (NBC Universal, Lionsgate) and pornographers (BangBros.com, Evil Angel) all issue hundreds or thousands of requests each week.

According to the study, 97 percent of material named in DMCA takedown requests are removed from search results.

If this rate keeps up, one has to wonder how much Internet we’ll have left to search in a few years.