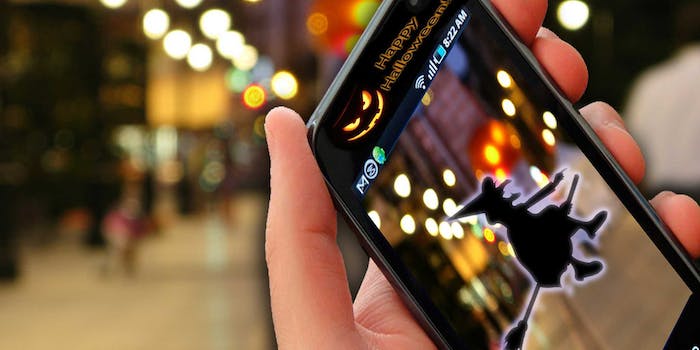 For techies, would-be techies, and those who can simply follow directions on YouTube, Halloween is open to all sorts of digital, devilish chicanery. This mash up of DIY and store-bought Halloween tech projects fall into some general categories, so there is something for everyone’s Oct. 31 no matter your skill set or budget.

What had to start off as a too-much-time-on-his-hands idea now appears to be big business. NASA engineer Mark Rober took some time off between mission-critical space launches to devise a cool series of apps that turned ordinary T-shirts into well-imaged costumes featuring a skull with a moving eyeball (which is actually your smartphone) behind it. His initial idea grew into a fully fledged series of apps under the name of Digital Dudz. The collection includes a cyborg mask, Iron Man suit, and a seriously horrifying rotten clown outfit.

The nice folks from Popular Mechanics took a break from teaching us how to build our own septic systems to offer up some tips on creating the ultimate get-up for Halloween.

My personal favorite is the cyborg made by dissembling old gadgets gathering dust in the garage (yes, that dual floppy disc PC from your youth). All you have to do is the right pieces to stitch or glue together to resemble a one-eyed, creepazoid beast. And you thought there was no good use for your old printers!

On the other hand, who could say no to the glow-in-the-dark jellyfish costume?

Take a round bowl or another similarly shaped item that fits over your dome and attach strings of LED lights. Done.

Some of these tricks might require a small investment, but they can be used every year until either you or your neighbors get sick of them. As long as you don’t use them to deliver packages to your friends and family, you can buy a quadcopter, put a sheet over it, and scare the crap out of passersby.

The nice folks from D-Link offer easy-to-use Wi-Fi cameras that you can placed inside a carved-out pumpkin to keep an eye on any mischief-makers (i.e., the egging and tee-peeing crew). It’s also gives you time to ready the water balloons, should you choose to attack first.

You can also either buy or make a sensor that triggers all sorts of actions. Turning lights off and on is child’s play; the idea of a sensor setting off a recording of Monster Mash is way cooler.

You probably have a Power PMAC Motion Controller on hand and some fairly advanced CAD skills right? OK, this might be for just a few of you, but if you’re looking to create a Jack-O-Lantern that will be the envy of Peter Max, nothing beats watching a robot arm with a carving tool bringing your sketches to life.

If you’re a 3D printing master (or know someone who is), follow the lead of the University of Michigan Engineering School and create your own (probably inedible) pumpkin complete with the logo of your choice.

To pay homage to one of the greatest horror films of its time, and liven up your costume bash, you can fork over $5,000 and purchase a replica of the shaking bed from The Exorcist.

Lastly, for fans of the film Closed Circuit, you can buy a replica of the robot Johnny 5 for a mere $25,000. If you are too lazy to hand out goodies to the kids crowding your doorstep, J-5 makes a nice (if not boring) trick-or-treat servant. For $25,000, I’d rather hire Mistress of the Dark, Elvira, for the night to dish out the sweets and delight the kiddies.