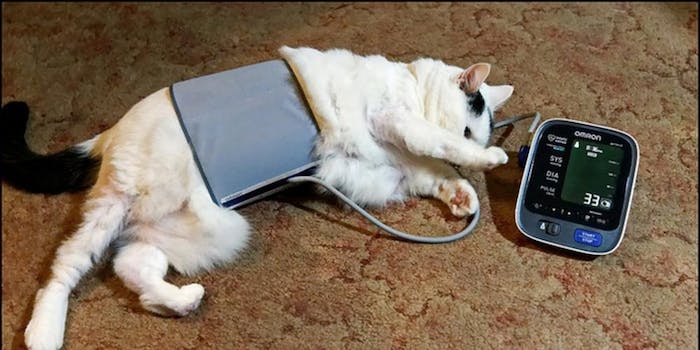 Researchers are developing a wearable that can detect disease

It may or may not look exactly like this.

Most wearable tech, such as fitness trackers or jewelry that sync to your smartphone, is aimed at improving the quality of your life. But this wearable vapor sensor in development at the University of Michigan might very well save it.

Researchers are currently working on a wearable vapor sensor, which would monitor and detect the presence of disease by measuring the amount of airborne molecules, or biomarkers, released through the skin. The sensor would also alert the wearer to the presence of hazardous chemicals in the area, as well as provide information about air quality, which the researchers behind the sensor say could potentially save countless lives.

The sensor is being developed by Sherman Fan, a professor of biomedical engineering, Zhaohui Zhong, an associate professor of electrical and computer engineering, and Girish Kulkani, a doctoral candidate in electrical engineering. It would essentially monitor the progress of disease by tracking chemicals such as nitric oxide and oxygen in the wearer’s blood, elevated levels of which indicate the presence of high blood pressure or anemia, among other medical conditions.

Although the researchers aren’t the first to come up with an idea for a wearable disease-tracking sensor—Intel Corp. has also teamed up with the Michael J. Fox Foundation to develop a wearable that monitors the symptoms of Parkinson’s patients—they say their device is faster and much less bulky than previous models.

“With our platform technology, we can measure a variety of chemicals at the same time, or modify the device to target specific chemicals,” Zhong says. “There are limitless possibilities.”