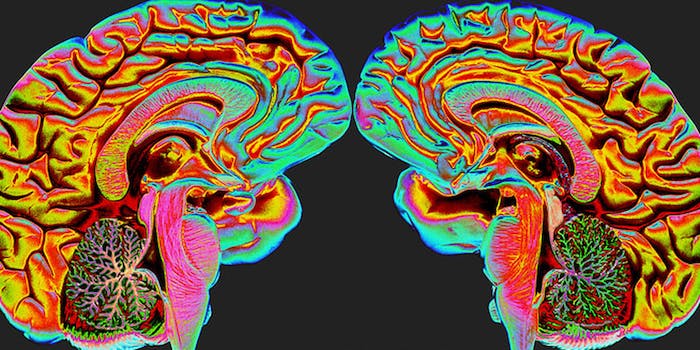 Researchers take us one step closer to mind control

It's science fiction, minus the "fiction."

Researchers at the University of Washington have just made it possible for one person to read another’s mind—via the Internet, anyway.

The Web is perhaps already too good at transmitting our every waking thought, but Professors Rajesh P.N. Rao, Andrea Stocco and their colleagues wanted to test its capacity for facilitating direct brain-to-brain communication:

Electrical brain activity from Subject 1 (the “Sender”) is recorded using EEG in the Neural Systems Laboratory in the Computer Science and Engineering building at UW. This brain activity is interpreted by a computer and is transmitted (when classified as a valid motor imagery signal) over the internet to the TMS machine in the Institute for Learning and Brain Sciences (I-LABS) building at UW. The TMS machine delivers a magnetic stimulation pulse to the left motor brain region of Subject 2 (the “Receiver”), causing the right hand to press a key.

For the pilot study, the experimenters wanted Subjects 1 and 2 to collaborate on—what else?—a computer game. In order to win, they would have to protect a city by shooting down an enemy plane. But only Subject 1 can see what’s happening in the game, and only Subject 2 has the ability to launch the missiles.

Therefore, Subject 1 has to “engage in motor imagery of the right hand (i.e., imagine moving their right hand)—this imagery signal is recognized by the computer and translated to a magnetic stimulation pulse that is delivered to the right motor cortex region of the Receiver. The stimulation causes a quick upward jerk of the Receiver’s right hand, which is resting slightly above the ‘fire’ key on a keyboard.”

Pretty cool stuff, so long as it doesn’t fall into the wrong hands. So what now?

“The next phase of the study will attempt to quantify this transfer of information using a larger pool of human subjects.” That doesn’t tell us a lot about future applications of this technology, but we have some ideas: What about a device to ensure workplace productivity? We could conceivably use the Internet to keep cubicle dwellers off the Internet.