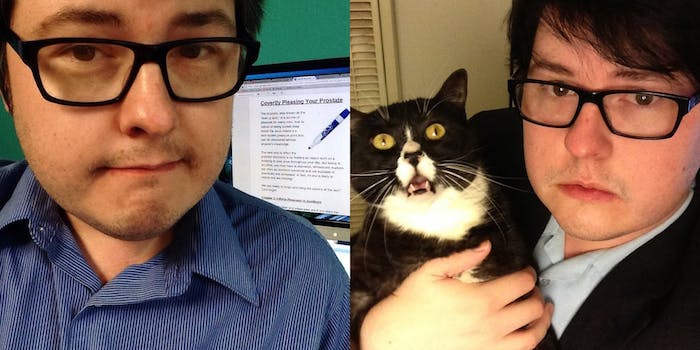 Jon Hendren is a special kind of Twitter user.

Jon Hendren is a special kind of Twitter user. He exists in that place called Weird Twitter, where users tell in-jokes, spew political commentary, and reveal love affairs with their cats.

According to legend, Hendren (better known as @fart) is committed to making sure Hermit Thrush doesn’t have sex in 2015, and he once convinced the lead singer of Smash Mouth to eat a lot of eggs. But he’s not just a Twitter personality and comedy writer. Hendren is also a DevOps thought leader.

DevOps, a portmanteau of development and operations, is the latest technology slang to gain popularity among developers and technologists. Some have even proclaimed that 2015 will be the year of DevOps.

So… what even is it? According to Hendren, DevOps is “mostly just a way of reorganizing all your nerds and making them talk to each other more.”

In software development, this structured communication between the teams that build and execute a product is important. But like “the cloud,” “disruption,” and other esoteric tech terms that have been widely adopted into human speech, DevOps is letting itself get take away. Every day it gets trendier, and every day people jump on board the DevOps boat.

And these were the people Hendren couldn’t stand; the self-appointed “thought leaders” and DevOps experts.

So he became one. Hendren took tens of thousands of followers he’d racked up (largely thanks to meaningless, insidery comic relief) and switched gears.

“They go around to conferences and give talks and lectures that really say nothing—there’s this community of guys who take themselves really seriously,” says Hendren.

It’s worth noting that Hendren truly is a DevOps guy—that’s part of what he does for a company called ScriptRock—but he took it to a new level on Twitter. “I mostly began saying, ‘I’m the most incredible person on Earth and the greatest thought leader.’”

Slowly his DevOps reach began to spread as he coined terms like “data beans” (which means literally nothing) and blogged about his advancement as a DevOps “thought lord.” And while his followers weren’t necessarily software developers or entrepreneurs (some had been Hendren fans since he began writing comedy for Something Awful in 2005), even those following him for the laughs eventually came to understand the simplicity behind DevOps.

His mockery of DevOps culture was a way to expose the emperor without any clothes—essentially helping people understand this mythical “thing” doesn’t exist in some obscure, high-level technology hive-mind. It’s really just business practices based around… you know, common sense.

To a certain extent, it worked: Hendren became a DevOps Twitter thought leader—whatever that means—raking in new followers who think he’s a serious influencer in the field. Not everyone’s a fan, though. People who have made careers evangelizing DevOps don’t see the humor in his experiment.

“They don’t typically acknowledge what’s going on, even though they are aware of it,” Hendren said. “But we were at [a DevOps event in Chicago], and one of the guys came up to me and said, ‘You’re a big asshole.’”

To quantify just how far his influence reaches, Hendren and his colleague Greg Pollock tested DevOps Twitter advertisements. The duo bought two separate silos of targeted advertising; one included Hendren’s 76,000 followers, and the other didn’t.

“It was frightening; I don’t know if people take him seriously,” Pollock said. “I know that Twitter’s advertising algorithm, which is the core of Twitter’s business, takes him seriously.”

His data found that the targeted DevOps advertising that included Hendren’s followers accounted for 23 percent of the total DevOps audience on Twitter. And that 600 ad impressions were served thanks to his followers alone over the course of a day and a half.

Some software companies have even caught on to this trend.

Between tweets filled with Taylor Swift music videos and complete and utter nonsense, @fart became a DevOps thought leader and took a Twitter community with him. The satire had worked, thwarting Twitter’s algorithm at least insomuch as its inability to identify true intentions.

“There’s an opportunity for some education, at least for people in the tech industry who aren’t developers just to know what their friends are talking about, and give starter kit information on it,” he said. “I don’t want to be the guy that goes into details and gives acronyms and shows you how to automate your infrastructure. That’s not funny at all.”

Although he inadvertently became a DevOps spokesperson by tweeting and writing about data beans and “kissing a data elf,” he’s going to keep at it, because apparently, it works.

“My goal is to remain funny so people will pay attention to it,” he said.

Perhaps 2015 is the Year of DevOps after all. As long as @fart is tweeting about it.