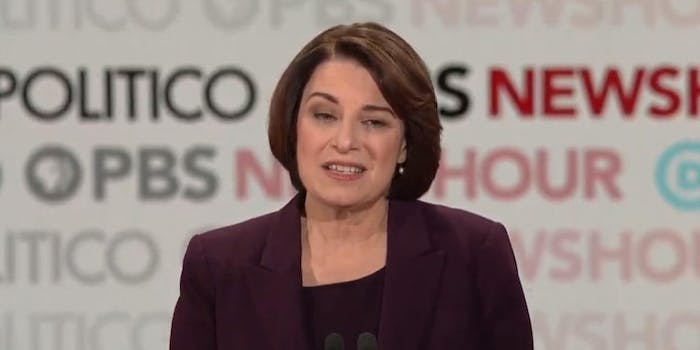 'The nausea is real.'

The last Democratic presidential debate before the holidays isn’t likely to move the needle much for the candidates. But at least one thing was getting the move on: the background behind them.

The debate included a unique backdrop on which the names of co-presenters PBS NewsHour and Politico slowly drifted by in a manner reminiscent of ocean currents or floating along in a political fever dream.

The effect made people feel sick.

“The floating logos in the background are nauseating,” tweeted Joe Danziger. The New York Times’ columnist Charles M. Blow said, “These moving logos behind the candidates are going to drive me crazy.”

“Those moving logos are messing with my equilibrium. The nausea is real,” said @guitardawn.

Be careful, though, it may make you a bit woozy.

We’re in the fight of our lives—and we can't go into it with one hand tied behind our backs.

We need everybody by our side. That means Democrats, Independents, and Republicans. So if you’re ready to defeat Donald Trump, join us. #DemDebate pic.twitter.com/DRkq5Ur62Z

Anyone else getting a headache from the moving logos behind the candidates? #DemDebate

@PBS STOP the moving logos behind the candidates! #Dizzy #DemDebate

These moving logos are giving me a headache. #DemDebate pic.twitter.com/lyBQ8mQ7Hg

The set design at this @CNN #DemDebate is so bad. Who thought it would be good to have hundreds of logos crawling behind the candidates?

After a week of high-flying political news of the impeachment of President Donald Trump, early in the debate, the slow-moving logos had about as much energy as the seven candidates who qualified.

On the bright side, it at least gave people something to focus on other than the canned answers.