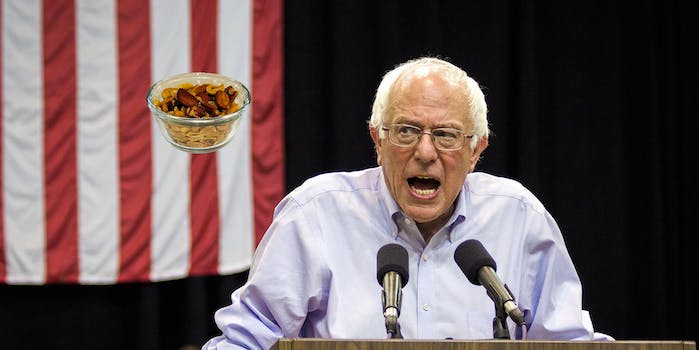 Deez Nuts still wants to be president, though.

Deez Nuts, the most nonsensical viral 2016 presidential candidate yet, now supports the actual most viral candidate in his party’s election.

In a post on his reportedly official Facebook page Friday afternoon, Nuts endorsed Vermont senator Bernie Sanders for the Democratic nomination for president.

Deez Nuts is not, of course, a traditional political candidate, but instead the brainchild of a 15-year-old Iowan inspired by previous nonsensical political campaigns. He really did file that name as a presidential candidate, and took the country by surprise when 9 percent of polled North Carolinians chose him as their preferred candidate, which in turn caused a viral sensation, which in turn forced newscasters to repeatedly say “Deez Nuts” on air.

To be clear, Nuts doesn’t want Sanders to be president, just the Democratic nominee.

He’s also chosen Ohio governor John Kasich as his Republican favorite. But his actual choice for president remains himself.