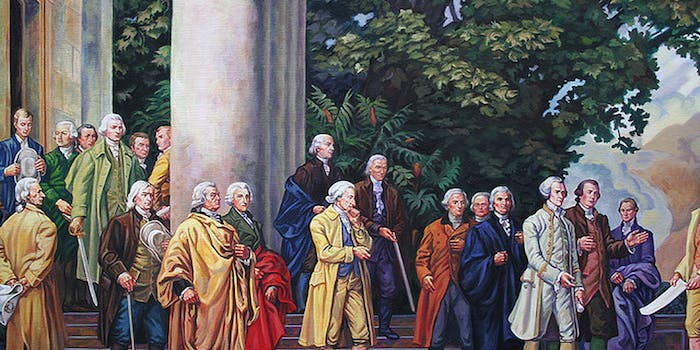 Some of the Internet’s most prominent activists have banded together to create what they’re calling a Declaration of Internet Freedom.

According to Josh Levy, the Free Press’s Internet campaign director, the idea came about soon after millions of people participated in the massive, successful Internet strike against the Stop Online Piracy and Protect IP Acts (SOPA and PIPA, respectively) in January.

“Many never thought about the internet having political implications before,” he said in a press conference. “But the Internet is a fragile thing,” that needs protecting by its users.

“This is about building political power for Internet users,” Levy added.

To that end, the Free Press recruited some of the most prominent leaders of the SOPA and PIPA strike, most notably Reddit cofounder Alexis Ohanian, Cheezburger CEO Ben Huh, and Techdirt creator Mike Masnick.

To be fair, it’s not the most novel idea. Others, most notably the redditors who created the Free Internet Act and U.S. Representative Darrell Issa, have attempted to crowdsource documents to establish a list of freedoms that could apply to all Internet users.

But neither of those are as succinct or as high profile as these five principles. And “this wasn’t created by a member of Congress,” Levy added.

In addition to its noteworthy founders, almost 100 companies have signed the declaration, including activist groups (the Amnesty International, Reporters Without Borders), tech companies (Mozilla), and even prominent Web cartoons (Saturday Morning Breakfast Cereal).

The principles are deliberately written as ideals, rather than targeting specific kinds of legislation.
“None are addressing government or corporations,” Levy said. This way, they could be used equally to condemn SOPA, which was heavily influenced by entertainment lobbyists, the Cyber Intelligence Security Protection Agency (CISPA), which opponents say violates user privacy, or for a number of laws in countries where Netizens are prosecuted for criticizing religion or their government.

“I would like to see our elected officials sign on,” Ohanian said. “Just a simple litmus test for Internet aptitude.”

And not a moment too soon. Chris Dodd, the head of the lobbyist group for the Motion Picture Association of America, has indicated that he wants to start the next round of SOPA-like legislation in January 2013.