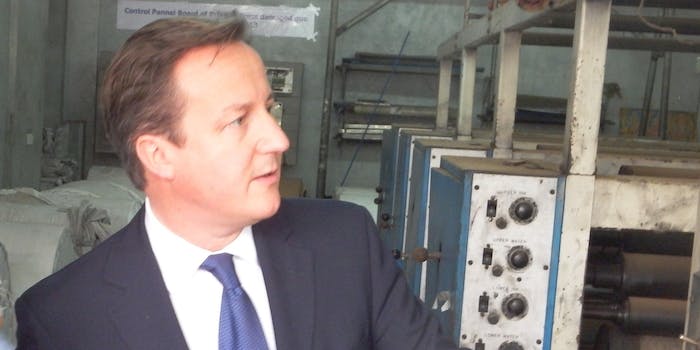 British Prime Minister David Cameron is being criticized for refusing to wear a T-shirt with the slogan, “This is what a feminist looks like.”

Celebrities like Benedict Cumberbatch have been photographed by Elle magazine wearing similar shirts, as have two of the U.K.’s other political leaders, Nick Clegg and Ed Miliband. Cameron, however, refused to wear the shirt, which is manufactured by gender equality campaigners the Fawcett Society. In fact, according to Elle, he refused five times.

Being photographed in a mildly pro-feminist t-shirt is pretty much the most passive and accessible way a public figure can lend their support, so it comes as something of a surprise that the PR-conscious PM turned down Elle’s offer of a photo opportunity. The fallout on Twitter has not been pretty.

One of the most common responses is that it would actually be inaccurate for Cameron to wear the T-shirt in the first place. Many argue that his policies already prove that he isn’t a feminist, so really he’s just being honest.

Thrillingly, David Cameron is almost exactly what a feminist doesn’t look like, so it’s actually rather beautiful.

EQUALITY: David Cameron refuses to wear ‘This is What a Feminist Looks Like’ t-shirt. Inside, we salute his honesty.

In fairness, if David Cameron had worn a t-shirt saying “this is what a feminist looks like”, I would have had to stop being a feminist

Cameron has a history of discomfort with the “feminist” label, as highlighted in an interview last year in which he said, “I don’t know what I’d call myself,” before admitting that he does think men and women should be equal. However, his refusal to wear a slogan-adorned T-shirt for Elle was probably not meant to be a political statement. As political blogger Guido Fawkes pointed out on Twitter, Cameron is the prime minister, and hopefully has better things to do than pose for a fashion magazine.