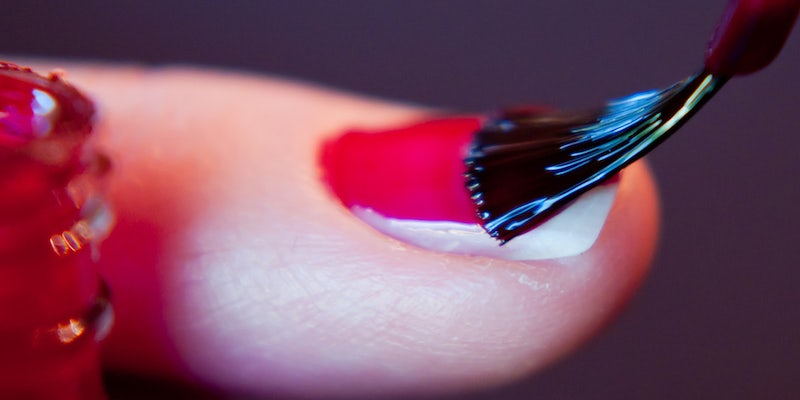 This nail polish can detect date-rape drugs in your drink

All you have to do is dip a finger in your drink and see if your nail changes color.

Remember the pd.id, the tiny, lighter-sized device that women could slip in their drinks to detect the presence of date-rape drugs? Soon you won’t need to carry around a sensor with you to protect yourself during a night on the town—all you’ll need is a manicure before you go.

The startup Undercover Colors, which is marketing itself as “the first fashion company to prevent sexual assault,” is currently developing a brand of nail polish that can detect the presence of date-rape drugs, which are generally colorless and odorless, in someone’s beverage. All you have to do is surreptitiously dip a nail into your drink, and wait to see if it changes color.

“We were thinking about big problems in our society, [and] the topic of drug-facilitated sexual assault came up,” he recently told Higher Education Works. “All of us have been close to someone who has been through the terrible experience, and we began to focus on preventive solutions, especially those that could be integrated into products that women already use.”

According to the Center for Disease Control and Prevention, nearly one in five women experience sexual assault during their lifetimes. Nearly a third of sexual assault cases take place while women are in college. A 2009 study estimates that 20 percent of college women will become victims of date rape by the time they are seniors, with alcohol playing a role in their assault nearly 80 percent of the time.

Given how pervasive date rape is on most college campuses, Undercover Colors’ nail polish patent, while currently still in development, could be immensely valuable toward curbing sexual assault rates and giving women the tools they need to protect themselves against date rape. But of course, it would be even better if there was no need for such a product, and women didn’t need to take steps to protect themselves against date rape, because no men date raped at all.