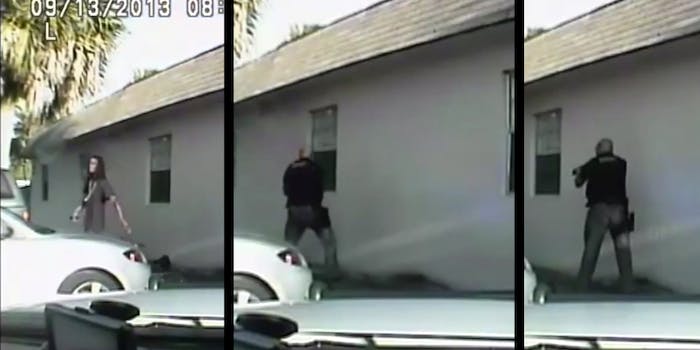 Screengrab via YouHotNews/YouTube/Remix by Joey Keeton

As part of an unsettling new trend over the past year, local Florida affiliate WPTV has obtained exclusive dashcam footage of a 20-year-old unarmed black male, Dontrell Stephens, shot four times after getting off his bike and walking toward a Palm Beach County Sheriff’s deputy. Warning: This footage is violent and may be difficult to watch.

As WPTV reports, Stephens was indeed holding something in his right hand, but it was a cell phone—which would have to be mistaken for an extremely small firearm. Approximately eight seconds pass between Stephens dismounting his bicycle, and the shots being fired—no words from the assaulting officer can be heard on the video, but anything would be difficult to hear over the FM radio station left playing in the recording cruiser.

Despite the garbled audio, WPTV reported the following exchange between the deputies:

…an admittedly shaken Deputy Lin is heard talking to another deputy.

Deputy Adams Lin was cleared to return to duty four days later. On the day of the shooting, Sheriff Ric Bradshaw addressed the shooting to local reporters with the following statement:

“Stop what you’re doing and comply with us…. There’s nothing in the rules of engagement that says we have to put our lives in jeopardy to wait to find out what this is to get killed.”

This tweet shows how the incident was reported on the day it occurred—framed as a problem with abundance of crime in the area, with images of Stephen’s prior mugshot emphasized:

That’s a far cry from how the shooting is being looked at following the release of the dashcam footage:

"Np, you're thinking of THE OTHER ONE."

Look, if cops want to go hunting for sport… https://t.co/rA8Su8ZLDT

Price of carrying a cellphone – shot, paralyzed below the waist >> https://t.co/jjhewCmrjb | via @HuffPostCrime

Stephens survived the incident, but is now paralyzed from the waist down. A West Palm Beach, Fla., attorney is suing the deputy that fired the shots—and Sheriff Bradshaw—claiming that statements made by the officers don’t match up with those found on recorded sources at the scene of the shooting. As he told WPTV:

“There are no records of any commands ever made to Dontrell Stephens…. The deputy’s recorded statements following the shooting were absolutely false.  Internal affairs completely ignored that evidence.”

With litigation now pending, Sheriff Bradshaw is adhering to his own policy of making no comments regarding the incident.

Correction: An earlier version of this article incorrectly stated the department of the deputy, who works for the Palm Beach County Sheriff’s Office.