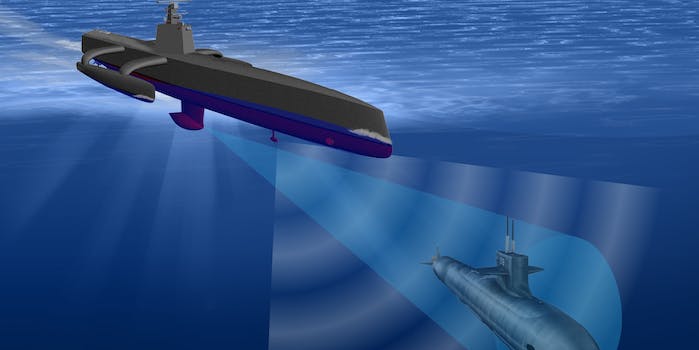 Why should military drones be limited to raining down hellfire from the sky?

The Pentagon’s Defense Advanced Research Projects Agency, better known as DARPA, is one of the few government agencies that people actually seem to like, mainly because it takes everything interesting in science fiction movies and tries to make it a reality. The latest DARPA project is no exception: An underwater drone that will hunt stealth submarines has gone into production.

Defense contractor Leidos announced that it has started construction of an autonomous unmanned vessel (ACTUV) for DARPA, with underwater trials slated to begin in 2015. When the project was first announced in 2012, Scott Littlefield, a program manager for DARPA said, “our goal is to transition an operational game-changer to the Navy. This should create an asymmetry to our advantage, negating a challenging submarine threat at one-tenth their cost of building subs.”

“ACTUV’s advanced sensor technology should allow for continuous surveillance which, combined with the vessel architecture and design, is expected to provide autonomous safe navigation supporting Navy missions around the world,” John Fratamico, Leidos Group President, said in a statement earlier this month.

The Navy has grown concerned about quiet diesel-electric submarines being built by Russia, which are nearly impossible to track. North Korea has the largest submarine fleet in the world, with 78 submarines, outpacing the U.S. and Chinese submarine fleets, who maintain 72 and 69 submarines, respectively.

Leidos says ACTUV should only take 15 months to build, thanks to a modular design and no need for crew quarters. How safe is an unmanned submarine-destroying drone? That is still to be determined, but DARPA did create a game simulator for ACTUV to crowdsource ideas from the public. Because who is better at underwater tactical warfare than the Internet? Hug your children.