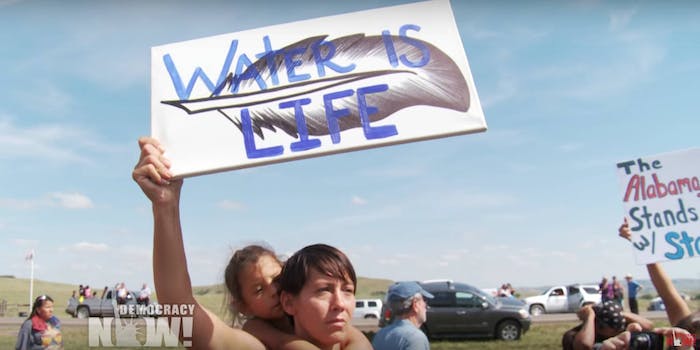 The United States government has issued an order calling on construction to halt on the Dakota Access Pipeline, a contentious project that has seen massive protests from Native Americans and activists as well as legal action against it by the Standing Rock Sioux Tribe.

The lawsuit, which requested a halt in construction on the pipeline, was struck down by Washington Judge James E. Boasberg, who stated that regulators acted appropriately when issuing permits. Shortly after, the Obama administration stepped in.

According to the New York Times, the decision to halt construction was based off a need to further assess the pipeline’s environmental implications. A joint statement was released by the Justice and Interior Departments as well as the Army:

“We appreciate the District Court’s opinion on the U.S. Army Corps of Engineers’ compliance with the National Historic Preservation Act. However, important issues raised by the Standing Rock Sioux Tribe and other tribal nations and their members regarding the Dakota Access pipeline specifically, and pipeline-related decision-making generally, remain.”

Part of the pipeline’s four state, 1,170 mile path runs right next to the northern boundary of the Standing Rock Sioux Tribe’s reservation. The Tribe claims that the pipeline itself runs through burial grounds and areas of cultural significance. Construction planned under a dammed section of the Missouri River that crosses into Lake Oahe was of particular concern, as it could affect the tribe’s water supply.

The Hill obtained a statement from Standing Rock Sioux Tribe Chairman Dave Archambault II, who was realistic about the ongoing battle to protect the land that the $3.7 billion pipeline would effect.

Dave Archambault II, the chairman of the Standing Rock Sioux Tribe, hailed the decision, and vowed to continue fighting against the project.

“Our work is not done,” Archambault said. “We need to to permanently protect our sacred sites and our water. There are areas on the construction route that do not fall within federal jurisdiction, so we will continue to fight.”