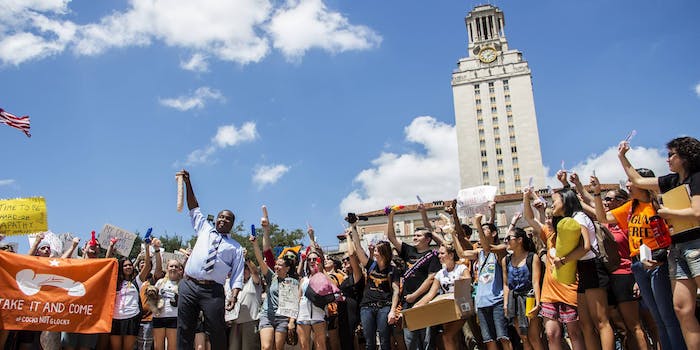 In protest of Senate Bill 11, a new state law that allows concealed handguns in some buildings on public university campuses, UT students are carrying sex toys to class and sharing their anger about the newly enacted law through the hashtag #CocksNotGlocks. The movement that started 10 months ago has gone viral and sparked national attention from all kinds of outlets, including the Daily Show.

As the Cocks Not Glocks movement swung into full gear Wednesday afternoon, Roy Wood Jr. of the Daily Show stopped by to witness and report on the implementation of campus carry. He and his camera crew filmed a short segment for the show that featured him leading the activists in protest in the Main Mall of the university. “At the end of the day, this is your safety that we’re talking about. This shit ain’t a joke,” Wood told the crowd. “I will teach you the techniques of proper protesting as taught to me by my ancestors and a couple of civil rights movies that I watched this morning.” Austin band Interrobang performed during the Daily Show segment. Member Mason Hankamer told the Daily Dot he was proud to be in the segment for such a worthy cause.

“This whole thing is super cool and I’m glad it’s getting the attention because I thought it would be overshadowed by all the counter protests,” Hankamer said. “The fact that the Daily Show is here is going to make people notice that this entire legislative process isn’t okay. Maybe it will even get noticed by [Texas Gov.] Greg Abbott.”

The Daily Show’s appearance at UT is symbolic of how far the grassroots movement has come since it was originally created by founder Jessica Jin. Cocks Not Glocks has grown from a Facebook event created by Jin as a joke into a full-fledged demonstration, supported by thousands of community members.

“We planned this 10 months ahead of time because we didn’t think it was actually going to be a protest,” Jin said. “We did a lot of learning and growing about what we were actually advocating for, because it started out as a giant joke. I personally didn’t know anything about gun culture or gun violence prevention, so I had a lot of learning to do.” Jin said Cocks Not Glocks would not have been possible without the internet and social media amplifying its cause. But there have been a few downsides to all of the attention– the most prevalent being threats posed against her and her friends.

One of the arguments Cocks Not Glocks members make against campus carry is that they believe it crushes free speech in universities because people are afraid to speak up. Jin said internet trolls back up this theory.

“We have very difficult conversations here that get heated because we’re trying to solve the world’s worst problems. If you want to see an example of somebody totally overreacting to something that’s harmless like a toy, read the internet comments,” Jin says. “As soon as that freedom of speech gets choked off, that’s when our quality of education here at UT starts to die.”

Not every student agreed with Jin. Senior Coy Mack is planning to get his conceal carry permit soon and said that while the protest is clever, it’s also silly and that the attention online is misleading.

“That’s the problem that we have a lot with media today–we jump on to things too quickly, without any real solid leads or evidence like good journalism should,” Mack said. “Part of the problem with this concealed carry issue is that while they’re afraid and that’s justified … when you look at the statistics the people who are doing this are law-abiding citizens who haven’t done anything wrong.”

Mack said even though he doesn’t agree with Cocks Not Glocks, he respects the movement’s freedom to protest and thinks the online attacks against Jin are unjustified.

“We don’t need to threaten anyone to get our message across. We just need to have a simple conversation,” Mack said. “That’s how democracy works and when democracy thrives.”

Looks like as long as it’s legal to pack heat at UT, these students will continue to “pack meat.”