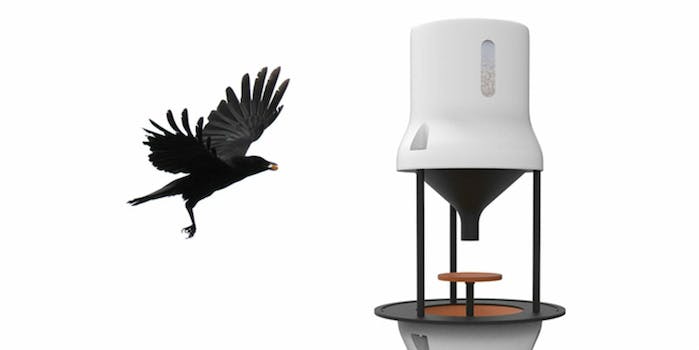 Smoking may be in decline, but our streets and walkways are still littered with cigarette butts.

Now, a Dutch startup has an offbeat solution for cleaning up cities and it’s stirring up controversy. Crowded Cities wants to exploit the intelligence of crows and train them to pick up cigarette butts in exchange for peanuts.

One of the company’s creators told The Next Web, which first reported on the startup, that they wanted to use pigeons, but discovered they weren’t intelligent enough. Crows, however, are one of the smartest animals in the world, with an encephalization quotient similar to a chimpanzee. Crows are capable of playing, learning from each other, and even counting.

Sure, you could just use Roomba-style robots, but Crowded Cities found that solution inelegant and complex. That, and the startup already has experience training crows. It previously built Crow Box, which is essentially a vending machine for birds. With it, Crowded Cities trained crows to pick up change and bring it back for a reward.

Cigarettes present a much larger problem. More than four trillion cigarette butts—filled with toxins and nicotine—end up in our environment every year, accounting for about 30 percent of all waste. The plastic inside cigarette filters takes more than 10 years to decompose. Crowded Cities believes it can significantly reduce those numbers using an army of well-trained crows.

To train the crows, a piece of food and cigarette butt are placed next to each other on a tray. Eventually, the food disappears and the crow is left pecking around at the tray looking for its meal. If all goes well, the crow will knock the cigarette butt off the tray into a funnel-shaped receptacle. Once it’s deposited, the crow gets rewarded with food. The final step is to scatter a bunch of cigarette butts on the ground next to the machine so the birds get used to picking them up and dropping them in.

Obviously, there are some ethical issues to sort out. A bird would die if it ate any of the lead or arsenic that is contained within a cigarette filter. The startup’s creators are aware of that and claim they will abandon the project if it harms the birds.

“The effect is on nature is huge, but the short contact with the butt ensures the effect is minimal,” Bob Spikman, designer at Crowded Cities, told The Next Web. “We can regulate the machine to limit the number of crows that are trained. But indeed, we still need to do extensive research on this, because if the effects are found out to be bad for crows we have to look for another solution.”

Some experts aren’t convinced it will work because the food reward would stop interesting the birds. Others simply think crows aren’t trainable in this manner.

“The whole premise is bogus,” Kevin McGowan, a researcher at Cornell Ornithology Lab, told Slate. “My collaborator here, who works with me in Ithaca, she worked with [Klein] for a couple of weeks with the friendliest family of crows that existed on earth. They barely would take food off the box. It just doesn’t work. Basically, to me, it’s the same as saying it would be a cool idea to graft wings onto sheep dogs so they could do better with rounding up sheep.”

Even if it doesn’t work, the Dutch startup hopes its project makes people more aware of the problem so humans can stop relying on animals to clean up their mess.