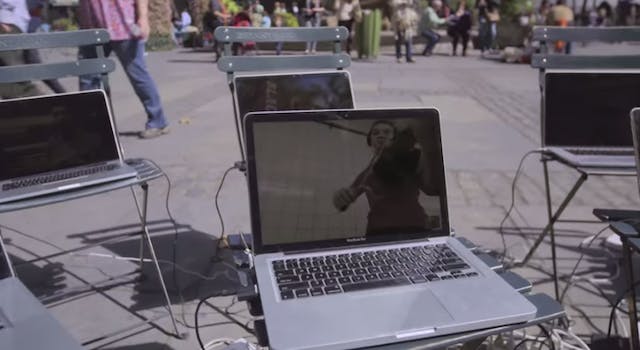 The making of ‘Signal Strength,’ the Wi-Fi-based subway orchestra

“I started to notice the subway stops were getting more signals, so I thought ‘Why not do a piece that involved New York City, the subway performers, and Wi-Fi?'" Why not indeed.

Since the launch of wireless capability in New York City subway stations, most New Yorkers have come to savor those luxury Wi-Fi-powered underground moments to do important things. You know—check Instagram, reply to texts, fav some tweets. But one new project is using the new Internet accessibility to showcase the quintessential subway mainstay: musicians.

In a recent short film, titled ‘Signal Strength’ the first NYC Wi-Fi Orchestra, filmmaker Chris Shimojima and his team conducted a live music experience in which several musicians were stationed at multiple subway stops, playing a tune together while remotely being conducted from Bryant Park via the subway’s Wi-Fi network.

Shimojima, who directed the film with the help of his production team, including producer Anita Anthonj and composer Ljova, said he’d “wanted to do something with music and New York City” for sometime, using the everyday commute as inspiration. He explained that the project fully kicked off when he and former collaborator Anthonj decided to document subway musicians in a unique way.

“I started to notice the subway stops were getting more signals, so I thought ‘Why not do a piece that involved New York City, the subway performers, and Wi-Fi?’ Liova had worked on a short film with me in the past, so we worked on a piece that would work for the project,” Shimojima said.

To choose the orchestra’s performers, the team went about finding the musicians in several ways, Anthonj explained. “Chris and I started scouting the city for incredible talent. Some people we just found, and several people we just talked to and liked. It was almost natural. Ljova also brought in some people. So they are all from different walks of our life.”

Despite such organic cooperation, there was plenty of detailed planning involved. Besides scouting locations for the best wireless signals, the large team (including many volunteers) had to figure out how to film all of the footage during a one-day shoot.

To help execute the technical side of the project Shimojima said the crew “wanted to make sure we have enough bandwidth to pull off the signal. We had two mobile hotspots to boost Wi-Fi signal and support all the devices.”

Given all the Internet-enabled devices the musicians used to receive the live feed during their performances, Wi-Fi was obviously the most important ingredient in this experiment.

With the musicians (who were scattered throughout nine underground stations) each equipped with a phone, extra battery pack, and laptop, Ljova was able to conduct the orchestra via Skype. All while being filmed on camera during a weekend morning commute.

While it was mostly smooth sailing during the live shoot, the team still had some issues to overcome in post-production.

“One tech issue we had to overcome was dealing with a lot of choppiness. The musicians were trying to watch and listen to their headphones, and it would come in very choppy. We had to figure out a way to get to a cleaner feed,” Shimojima explained.

The end result is nothing less than spectacular. Not only does the edited footage work together, but if you happened to pass by during the shoot, you’d just think each musician was performing independently.

Ljova, who admits he normally avoids conducting and prefers composing music, said he wrote the “Signal Strength” piece by bringing together all the musical elements he loves. He even gave the song a  title with a beautiful double meaning.

“With the title, I was really hoping that ‘signal’ would be taken as a verb,” he explained. “‘Signal’ is a metaphor for the strength of the community coming together.”