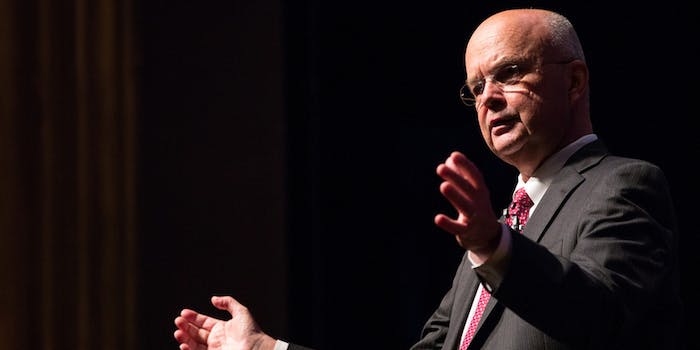 Former NSA chief heckled and booed by Republicans at CPAC

The retired spy had trouble making friends with the conservative crowd.

General Michael Hayden, the former head of the NSA, apparently isn’t receiving the respect he deserves as an “unrelenting libertarian” supporter of the U.S. Constitution.

While debating staunch libertarian Judge Andrew Napolitano over privacy rights at the 2015 Conservative Political Action Conference, the former spy chief, who once compared drone strikes to casual sex, became the target of boos and hecklers from within the Republican crowd.

Napolitano began the debate by asking everyone to make sure their cellphones were on. “I want President Obama and the NSA to be able to hear everything I’m about to tell you,” he said.

Americans should be “outraged,” the judge said, over the NSA’s use of secret courts to authorize the targeting of innocent Americans.

“We’ve come 180 degrees from fighting a war against those who would violate with impunity our right to be left alone, to hiring public servants who will do that to us,” he said. “We are in a twilight era where freedom is diminishing.”

“The judge is an unrelenting libertarian,” Hayden said, pausing for applause. “So am I,” he added, to which several people in the crowd responded by booing and shouting: “No, you’re not!”

“I’m an unrelenting libertarian,” Hayden continued, “who’s also responsible for four decades of his life for another important part of [the Constitution], the part that says ‘provide for the common defense.’”

Hayden was later asked by Napolitano: “Does the head of the NSA have the constitutional legal authority to move the line between privacy and surveillance?” Several people in the crowd began yelling, “No!” Dobbs, seated in the moderator’s chair, told Hayden: “There’s a clue how they’d like you to answer.”

“The accusations fit on a bumper sticker, but reality takes a little bit longer,” Hayden said. He went on to say the NSA is required to suppress information collected about U.S. citizens—a process he called “minimization”—while targeting foreigners.

“So in other words, foreign terrorist, ‘Abu Akmad bin Bad Guy’ was talking to a known U.S. person,” Hayden claimed, “… we minimize the U.S. identity to protect your privacy, unless of course, the identity of the U.S. is absolutely essential to the intelligence value of the intercept in the first place.”

Throughout the debate, Hayden attempted to downplay the most invasive aspects of the NSA’s spy programs. He failed, however, to adequately rebuff Napolitano’s principal argument—that unreasonably seizing an American’s property, in this case their private correspondence and data, without probable cause, violates the Fourth Amendment of the U.S. Constitution.