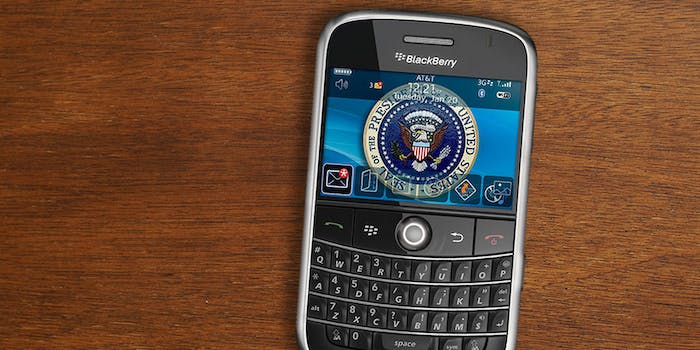 We’ve never been quite clear on why certain politicians and business folk remained loyal to their junky BlackBerries even as far superior gadgets flooded the market, but the device’s last, best endorsement may soon fade away: in a pilot program, the White House is shopping for next-gen alternatives, and the commander-in-chief himself may soon level up to an LG or Samsung smartphone.

Despite these possible changes for his staff, there are no signs that President Obama himself is switching from his specially modified BlackBerry any time soon, as the Wall Street Journal reported. But come on, we all know he’s playing with an HTC One and mulling the idea of a drone strike app for Android. And the singular advantage of the BlackBerry—its “proprietary network is widely considered the most secure” among competitors—won’t be a selling point for much longer, as other companies are working hard to better protect user data.

The most telling detail in all this is that the White House Communications Agency, a military unit tasked with keeping staffers from accidentally Snapchatting nuclear launch codes to Al Qaeda, won’t even consider switching to the iPhone. Obama does sometimes read stuff on an iPad, but probably just the occasional James Patterson mystery. Sorry, Apple: you’re not cut out for the highest levels of government. For one thing, you definitely failed that drug test.

At the end of the day, though, do we really want the leader of the free world to have access to a timesuck like Candy Crush? Probably best to lock him in the Oval Office with a rotary phone and tell him he can’t come out till he’s got this Crimea thing solved.