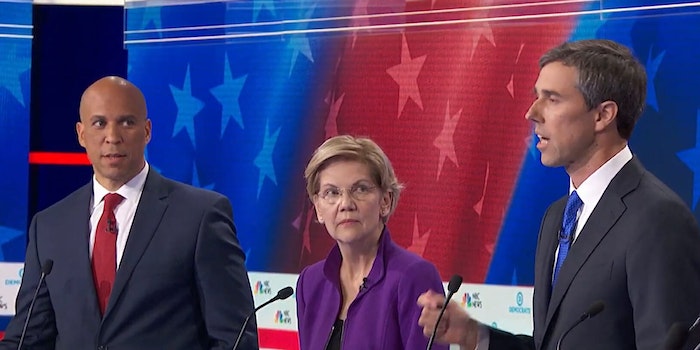 It led to the first jokes of the night.

O’Rourke was asked about a tax rate for Americans before answering the question partly in Spanish.

“This economy has got to work for everyone,” O’Rourke said. “And right now we know that it isn’t, and it’s going to take all of us coming together to make sure it does.”

The former Texas congressman, who lost to Sen. Ted Cruz (R-Texas) in a close Senate race during the 2018 midterm elections, then pivoted to talking in Spanish.

However, a small moment from Booker—where he looked side-eyed at his fellow 2020 hopeful—garnered attention.

It quickly caught aflame on Twitter as people watched along.

Cory Booker looked at Beto when he broke out the Spanish like. #DemDebate pic.twitter.com/uJO2Ck6z3f

It's been like 10 minutes and I am still thinking about Beto speaking Spanish and Cory Booker's face.

Later in the debate, Booker also answered a question partly in Spanish. Perhaps he was bothered because Beto stole his big thunder.