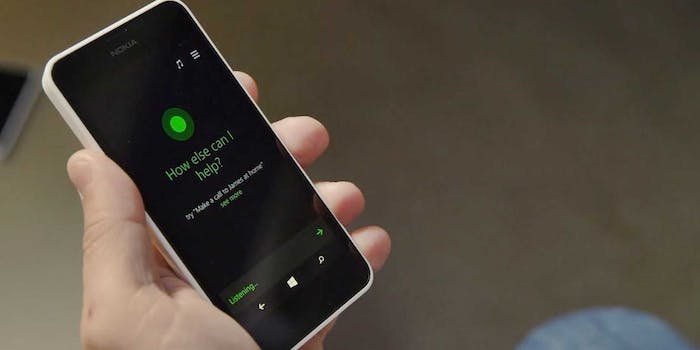 Microsoft‘s embrace of mobile operating systems other than its own continued on Monday when the computing giant introduced its voice assistant Cortana to its new digs: Android.

Things will be snug on the OS, where Google Now already calls home, but Cortana will provide a familiar experience for Windows 10 users who have and Android device in their pocket. Microsoft calls the mobile version of Cortana a “companion” to the desktop iteration, and claims the Android app “can do most of the things Cortana does on your PC or on a Windows phone.”

Cortana appears to be capable of tackling everything one would expect out of a voice-powered assistant. It can jot down notes and reminders, keep you plugged in to news and information that you deem important, and search the web and answer questions. The service will likely get better the longer its on Android and receives additional support and fine-tuning for the platform.

The move to Android has been expected since back in May, when Microsoft announced Cortana’s jump to Google’s mobile operating system was in the works (along with an eventual jump over to Apple devices running iOS.) A beta version of the voice-operated assistant has been available for Android users since July.

The trouble for Cortana on any OS that isn’t Windows, though, will be that it’s late. Siri and Google Now are integrated deeply into the operating systems they call home. Both work natively with Google and Apple apps respectively, plus other third-party offerings. Cortana is a fish out of water, and how well it can adapt and integrate will be indicative of its potential for success.

Cortana is just the latest Microsoft property to jump over to Android, following other institutions like Microsoft Office and Outlook. The company has even rolled out new properties from its app development team specifically for Android and iOS.

Microsoft’s own mobile OS isn’t dead, but there are no illusions about where Microsoft needs to put its products to get people to adopt them. And in the long term, Microsoft’s bet is on the apps bringing people back to its own products. Cortana figures to be a major part of Microsoft’s future plans, so a short term plan of putting it on other devices to prove its capabilities could make future Microsoft products that include Cortana more appealing.