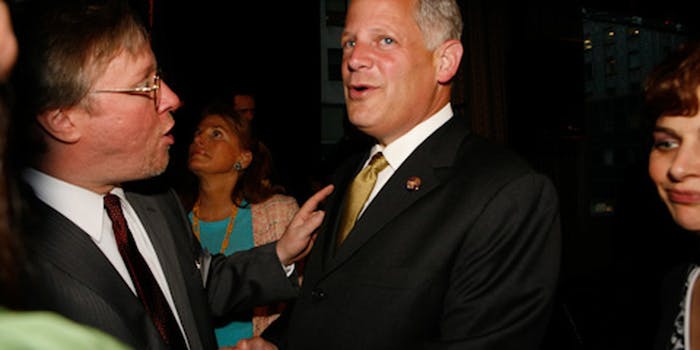 Do undetectable plastic guns actually exist, and is renewing a 1988  law the way to stop them?

When Defense Distributed tested an AR-15 semiautomatic weapon built around a plastic receiver they were able to download online and manufacture using a 3-D printer, close to half a million people watched on YouTube.

Among those viewers was Steve Israel, who found the 35-second video so disturbing he felt compelled to do something. Lucky for him, Israel happens to be a United States congressman, representing New York’s 2nd District.

On Friday, the congressman held a press conference at a security checkpoint at Long Island MacArthur Airport where he announced that he was planning on introducing legislation that would renew the Undetectable Firearms Act of 1988.

The law, which expired in 1998, but was renewed again in 2003, makes it “unlawful to manufacture, import, sell, ship, deliver, possess, transfer, or receive any firearm” that is not detectable by x-ray machines used at airports, or any gun that “does not generate an image that accurately depicts the shape of the component.”

Rep. Israel also wants to include any gun right out of Star Trek, meaning a weapon assembled from components manufactured on a 3-D printer.

“Congress passed a law banning plastic guns for two decades, when they were just a movie fantasy,” Israel stated at the conference.

“With the advent of 3-D printers these guns are suddenly a real possibility, but the law Congress passed is set to expire next year. We should act now to give law enforcement authorities the power to stop the development of these weapons before they are as easy to come by as a Google search.”

But are plastic guns actually more than a movie fantasy?

Cody Wilson, a University of Texas law student and spokesperson for Defense Distributed, says no.

“Plastic guns don’t exist, and for the 20 years that this law has existed, plastic guns haven’t existed,” Wilson told the Daily Dot via the phone. He noted that the video that sparked the controversy shows Defense Distributed using a gun assembled mostly from metal parts, and that the plastic lower receiver they used wasn’t their own design.

Interestingly enough, Defense Distributed, a group that has encountered several obstacles on their path to develop the world’s first printable gun, sees their vilification by Congressman Israel as a positive thing.
“Right now, wiki weapons don’t exist, but they’re talked about now with such intensity that they’re more real than the real thing.”

Even if the Undetectable Firearms Act is renewed, Defense Distributed would be exempt from it if they obtain a manufacturer’s license, something they’ve already applied for. The act clarifies that a “licensed manufacturer or any person acting pursuant to a contract with a licensed manufacturer, for the purpose of examining and testing such [a] firearm” is in the legal clear.

If their licensed, legally-produced guns pass the law’s airport metal detector test, they’ll be free to continue manufacturing them.

“Ironically what does a law like this do? It prevents you from making a wiki weapon. It  prevents anyone who’s not a manufacturer,” Wilson said. “It gives Defense Distributed monopoly powers to produce wiki weapons.”

“If I was cynical and self-interested I would lobby for this law to be passed and to be renewed. It would continue to advantage me. Of course we’re not planning on making money off of it.”

According to an Israel representative who spoke with CNET, the congressman doesn’t plan on modifying the language of the law, meaning that the renewed that the Undetectable Firearms Act won’t seek to regulate or restrict the usage and purchase of 3-D printers, the device that would theoretically make a printable gun possible.

The Daily Dot reached out to the congressman’s office seeking comment, but as of this writing they have yet to respond.

For their part, Wilson and Defense Distributed think that the politician is simply grandstanding.

“This is a political softball for him. ‘Oh yeah, easy, none of us want undetectable guns.’ Okay, fine. So he gets some easy points.”