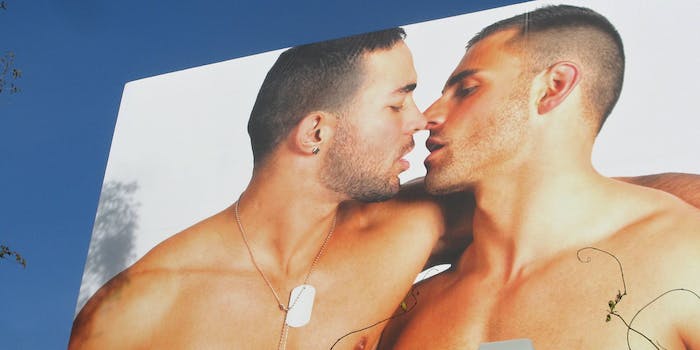 'In America, gay sex is not a crime.'

It’s been two weeks since Rep. Sean Maloney (D-N.Y) sent a letter to the Department of Homeland Security and the U.S. Department of Justice demanding answers on whether government’s case against Rentboy.com stemmed from anti-LGBT sentiment.

As of Wednesday, the two federal law-enforcement offices have still not responded to the Congressman’s office. Nor did they respond to requests for comment the Daily Dot made via phone on Wednesday.

Maloney is the sole member of Congress to come forward with criticisms of the government’s case against Rentboy; in his Feb. 22 letter addressed to DHS Secretary Jeh Johnson and Attorney General Loretta Lynch, he openly wonders about the possible “role that anti-LGBT attitudes and biases may have played in your pursuit of this matter.”

While LGBT advocacy groups roundly condemned the August Rentboy raid and subsequent indictment of founder and CEO Jeffrey Hurant, few elected officials have weighed in. The case was criticized in the media and by many members of the LGBT community as a throwback to anti-gay “sex panic” of days past—but most public officials have likely shied away from comment due to the case’s inextricable ties to sex work.

“As someone who has fought for years to ensure equality for the LGBT community,” Maloney said in an email to the Daily Dot, “I’m extremely troubled by the Department of Homeland Security’s seemingly arbitrary targeting of Rentboy.com.”

“We deserve answers as to why, after Rentboy.com operated openly for nearly two decades, the Department of Homeland Security is using their limited resources to prosecute individuals associated with Rentboy.com instead of focusing on combatting terrorism and keeping our country safe,” Maloney added.

In mid-February, just a few days prior to Maloney’s letter, the U.S. Attorney’s office abruptly dropped charges against six of the Rentboy employees who were charged in the multi-agency August raid against the website’s Manhattan office. Now, the lone remaining defendant is founder and CEO Jeffrey Hurant, who has been indicted by a federal grand jury on felony counts of money laundering and promoting prostitution. No explanation was provided as to why the government backed off the other six employees and instead focused the brunt of the case on Hurant, who pled not guilty in response to the charges.

As Maloney’s letter explains, Rentboy is the only sex work-related website DHS has ever targeted without any charges of trafficking, coercion, or labor exploitation. While Rentboy was very clearly a website that ran ads for male escorts and did not shy away from open discussion of sex in exchange for cash, the website had also operated openly since 1997—nearly 20 years—without any hint of legal trouble.

The federal raid of Rentboy’s office—just two months after a Supreme Court ruling legalized gay marriage nationwide—came as a shock to the LGBT community, with many left wondering, “why now?” In the days after the high-profile August raid, former Rentboy users told the Daily Dot that “homophobia” and “respectability politics” were responsible for the government’s targeting of the website.

“In America, gay sex is not a crime,” reads Maloney’s letter. “Many of us have fought for years to have LGBT relationships treated with the same kind of dignity and respect long afforded relationships in the straight community. By elevating the investigation and prosecution of Rentboy.com into a matter of ‘national security,’ your departments run the risk of resurrecting discredited and discriminatory attitudes about the consensual sexual activity of LGBT adults.”

The letter continues, lambasting the feds for spending tax dollars and using other resources, including undercover agents, to take down Rentboy instead of “combatting terrorism and violent criminal activity.”

Besides Maloney’s letter, members of Congress have remained silent on the Rentboy case, and law enforcement appears united in its justification of the controversial indictment.

In August, reports surfaced that Manhattan District Attorney Cyrus Vance had asked that his name and office be removed from the initial press release announcing the Rentboy raids. At the time, some in the LGBT community speculated that Vance was trying to distance himself from a case that outraged many Manhattan residents; however, it has since become clear that the case was actually being handled by the federal D.A. and the addition of the local office was a typo.

A trial date for Hurant has not yet been set, but it is expected to be announced in the coming weeks.