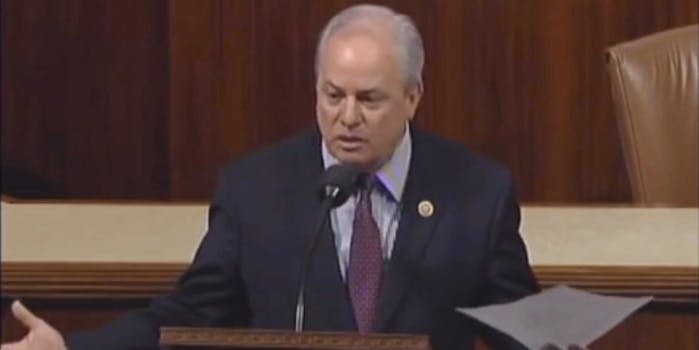 Rep. Mike Doyle (D-Pa.) asked his Republican colleagues to stop "trying to burn down the house."

There’s no doubt that social media has affected the national discourse about the federal government shutdown. But one tweet in particular will forever be enshrined in the Congressional Record regarding this political kerfuffle.

In the outpouring of Twitter frustration last week regarding the Republican grandstanding many blame for the government shutdown, Think Progress Editor and Chief Judd Legum’s tweet seemed to sum up the situation in a nutshell.

Can I burn down your house? No Just the 2nd floor? No Garage? No Let’s talk about what I can burn down. No YOU AREN’T COMPROMISING!

Legum’s quip, which so clearly highlights the hypocrisy that many see in the Republican position, received a dramatic reading recently on the floor of congress. Rep. Mike Doyle (D-Pa.) stood before his colleagues in the House and read the tweet verbatim while denouncing his GOP colleagues.

Doyle offered a few words of his own to drive home the point:

“Mr. Speaker, this is what we’ve been going through: ‘You want a budget for six weeks? Defund Obamacare! Delay Obamacare! Take away the individual mandate from Obamacare! Or, please, just sit down with us and tell us what we can take away from 20 million Americans who need healthcare, and then we’ll reopen the government.’

Let me say to my colleagues: If you would just stop trying to burn down the house, we can talk.”