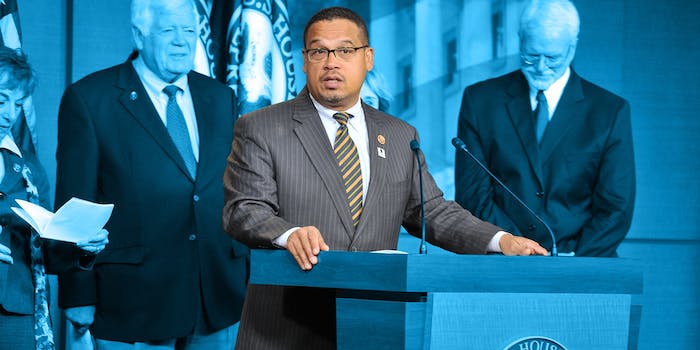 Sure, plenty of people enjoy a nice Japanese dinner prepared by a chef who’s got great knife skills.

But among official Twitter accounts belonging to members of Congress, only that of Rep. Keith Ellison (D-Minn.) take it up several notches by retweeting Weird Twitter‘s statement of “hell yeah benihana up in this bitch,” accompanied by a photo of an absolute disaster of homemade cooking: raw meat sizzling bare on a junky stove.

hell yeah benihana up in this bitch pic.twitter.com/n9vwx4r9yn

As noticed by the Sunlight Foundation’s Politwoops service, @keithellison almost immediately deleted the retweet, and it would have likely gone unnoticed if there weren’t bots to automatically log every single deleted tweet by a member of Congress.

An aide for Ellison, requesting anonymity, took the blame for the retweet, telling the Daily Dot that it was an honest mistake, meant to be from a personal account, and that Ellison doesn’t actually cook food scattered on his stove like some kind of animal.

Update: After speaking with the Daily Dot on the condition of anonymity, Ellison staffer Isi Kirshner-Breen has publicly taken responsibiity for the errant Benihana tweet.