Apparently, no one in Congress has heard of Godwin's Law.

Congress loves to talk about Hitler.

In this way, it’s no different from the rest of the Internet. You’re probably familiar with Godwin’s Law, which stipulates that given enough time, any online argument is going to invoke Adolf as an an example of pretty much anything taken too far.

But it’s not always easy to quantify just how eager Congress is to jump the Hitler gun. Thanks to a project from the nonprofit Sunlight Foundation called Capitol Words, visitors can search for and visualize any word or phrase to see how often it’s appeared in the official Congressional Record. 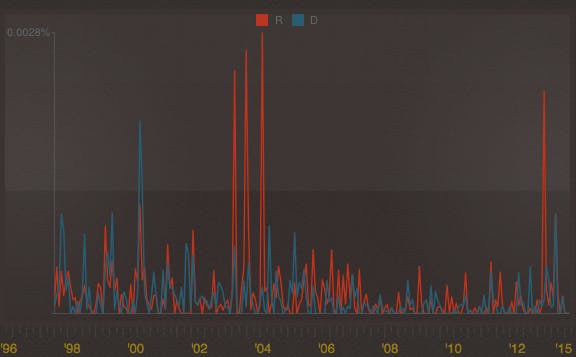 The findings? Since 1996, the earliest date Capitol Words’s database goes back to, House representatives and senators have said the word “Hitler” 1,771 times—an average of 7.7 times a month.

While members of both parties frequently bring up the leader of Nazi Germany, responsible for the largest genocide of human beings in modern history, Republicans do so more frequently, by a ratio of about 57-42 percent. Congressional Hitler-referencing reached a fever pitch in October 2003, when members of both parties combined said his name on the floor a total of 93 times.

And what, you might ask, are your senators and representatives talking about when they talk about Hitler? It’s as varied as the states they represent.

Sometimes, Congress uses Hitler as a unit of measurement. Sen. Heidi Heitkamp (D-N.D.) uses the time it took the U.S. to defeat the Third Reich as a way to compare how long Congress has deliberated the controversial Keystone Pipeline. “It has taken us longer to analyze Keystone than what it has taken us to beat Hitler—by far, almost 50 percent,” she said in November. He’s also a way to measure how evil a dictator—Saddam Hussein, in particular—might be. Hitler is 50 percent a Saddam, Rep. Bill Lipinski (D-Ill.) said, calling Hussein “Adolf Hitler and Joseph Stalin rolled into one.”

More than anything, Hitler is brought up as a historical reference for how bad things could get if we’re not careful. Rep. Gregory W. Meeks (D-N.Y.) warned that not intervening in Sudan would be like not intervening in the Holocaust. Lindsey Graham (R-S.C.) once said that Col. Muammar Gaddafi’s Libya could be like Hitler’s Germany. Rep. Sam Gejdenson (D-Conn.) cautioned that Belarusian president Alexander Lukashenko’s policies were “along the lines” of Hitler’s. Sen. Frank Lautenberg (D-N.J.) waxed similar when condemning the 2003 terrorist attack in Istanbul, as did Sen. Patrick Leahy (D-Vt.), who, concerned about the plight of the Roma in Serbia and Montenegro, recalled how Hitler had persecuted them.

Islam and some Muslim leaders are like Hitler, Congress has argued. ISIS sure is, said Rep. Robert Pittenger (R-N.C.). Iranian nuclear ambitions resembled Hitler, as did a Muslim Brotherhood-led Egypt, Rep. Trent Franks (R-Ariz.) said. Rep. Dana Rohrabacher (R-Calif.) called the stability the Taliban brought to Afghanistan “like the stability that Adolf Hitler brought to Europe.” Rep. Lynn Westmoreland (R-Ga.) put it more broadly, generalizing that “militant Islam is just as much of a danger” as Hitler.

Sometimes, the comparisons are more esoteric. Sen. Angus King (I-Maine) has warned that ignoring global warming would be like ignoring Hitler’s rise to power. Rep. Donald Manzullo (R-Ill.) warned Congress to not take Myanmar’s elections as proof it was liberalizing, because Hitler held elections too. Rep. Dana Rohrabacher (R-Calif.) warned of investing in China—as that was stupid, and it was “stupidity” that led Great Britain to invest in Germany after WWI, helping prompt Hitler’s rise.

Pleading for a law to ban cloning human beings, Rep. Joe Pitts (R-Pa.) said in 2001: “The few scientists who promote cloning call it progress. Well, I want to remind my colleagues that years ago Adolf Hitler employed the science of eugenics and also called it progress.”

At least once, a member of Congress argued on the House floor that the American military should follow Hitler’s example in ruthlessness. “There are those in America that say that we should stop the bombing of the Taliban during the holy month of Ramadan,” Rep. James A. Traficant (D-Ohio), said on Oct. 31, 2001. I disagree. Hitler did not stop on Yom Kippur.”

Rep. Roscoe G. Bartlett (R-Md.) has made the bold claim that the original claimant for the separation of church and state “was not one of our founding fathers. His name was Adolf Hitler, who told the preachers of Germany, ‘You take care of their souls and I will take care of the rest of their lives.’’’ (Thomas Jefferson may have disagreed with Bartlett that Hitler came earlier.)

Is this trend permanent? It’s hard to imagine history’s greatest monster ever not being used as a measuring stick. In recent years, though, Congress has evoked Hitler less and less, having not done it more than 34 times in a year since 2005, with the exception of 2014.

Is that because it’s become self-aware? It’s unlikely. As many times as Congress has mentioned Hitler—again, that’s 1,771 times since 1996—it’s never once mentioned Godwin’s Law.