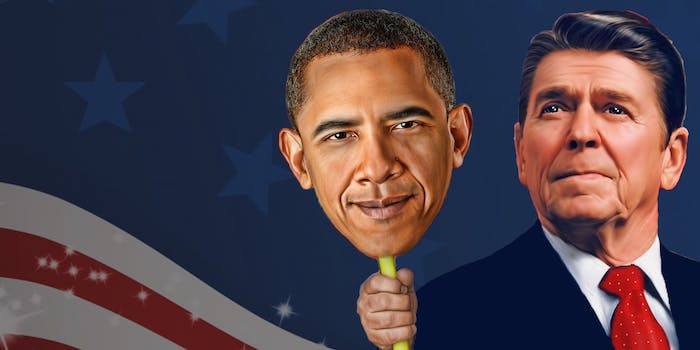 Debasing civil liberties is a rare area of bipartisan agreement.

Republicans and Democrats can’t agree on much these days, but members of Congress recently joined hands to codify a very worrisome national-security executive order into law.

The U.S. House of Representatives on Thursday passed a bill authorizing funding for the intelligence community with large bipartisan support. The vote was 325-100. All tallied, 55 Democrats and 45 Republicans voted against it. The same bill passed the Senate by unanimous consent, meaning that the only thing standing in its way is a signature from President Barack Obama.

The bill is essentially guaranteed to receive Obama’s signature—something privacy advocates have been pushing to prevent. That’s because one of the provisions in the bill enshrines Executive Order 12333, a Reagan-era surveillance directive, into law.

Executive Order 12333, issued by Reagan on Dec. 4, 1981, is one of the most controversial presidential directives ever issued. If Americans know its name at all, it is only because 12333 is at the heart of the sweeping surveillance apparatus established by the National Security Agency (NSA).

To collect contents and metadata from telephone calls and electronic communications, the NSA relies on Executive Order 12333 and Section 215 of the USA Patriot Act, also known as the “business records” provision, respectively. But where Section 215 features relatively serious privacy protections, 12333 is a lawless free-for-all by contrast.

Section 215 is subject to the oversight of the Foreign Intelligence Surveillance Court (FISC) and the congressional intelligence committees. It prohibits the collection of audio from phone calls, allowing only metadata collection. It likewise requires the NSA to eliminate the contents of U.S. persons’ phone calls if they are “incidentally” collected during an operation aimed at foreign nationals.

Under 12333, while the NSA still can’t individually target U.S. persons and gather content from their phone calls, it is not required to delete such content if it is incidentally acquired. The NSA, relying on 12333 authority, can keep U.S. persons’ phone-call recordings even if they are not implicated in any criminal behavior as long as the recordings were obtained accidentally.

As if that weren’t bad enough, 12333 sits outside the mainstream intelligence apparatus that is subject to congressional oversight. Senator Dianne Feinstein (D-Calif.), the chairwoman of the Senate Intelligence Committee until January, told McClatchy Newspapers in November 2013 that Congress could not “sufficiently” monitor 12333 operations.

“Twelve-triple-three programs are under the executive branch entirely,” Feinstein said. “I don’t think privacy protections are built into it. It’s an executive policy. The executive controls intelligence in the country.”

By codifying Executive Order 12333 as Section 309 of the intelligence community’s 2015 budget, Congress has given 12333 operations new legal footing without actually placing them under new oversight.

The House was so eager to pass the funding bill and move on that it was prepared to do so by unanimous consent, just like the Senate had done. The only reason there is a recorded vote of the action is because Rep. Justin Amash (R-Mich.) asked the clerk to call the roll.

“Sec. 309 provides the first statutory authority for the acquisition, retention, and dissemination of U.S. persons’ private communications obtained without legal process such as a court order or a subpoena,” Amash wrote on his Facebook page after the vote.

“The administration currently may conduct such surveillance under a claim of executive authority, such as E.O. 12333,” he wrote. “However, Congress never has approved of using executive authority in that way to capture and use Americans’ private telephone records, electronic communications, or cloud data.”

In July 2013, Amash worked with with Rep. John Conyers (D-Mich.) to introduce an amendment to the 2014 National Defense Authorization Act that would have ended the NSA’s phone-records collection. The House defeated the measure 217-2015.

In his Facebook post, Amash called the legislative language giving 12333 increased legal standing “one of the most egregious sections of law I’ve encountered during my time as a representative.”