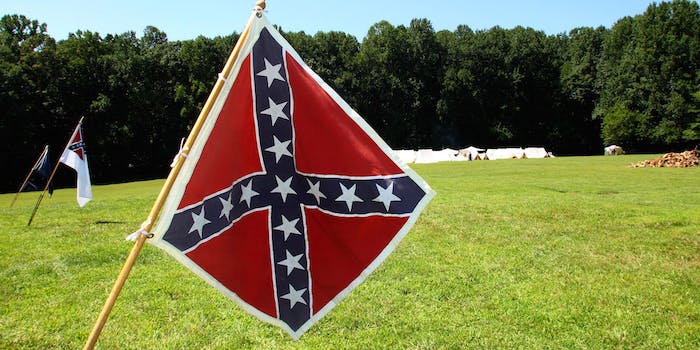 10 high-profile places that have banned the Confederate flag

The furling has begun.

One hundred and fifty years after the Civil War, the battle flag of Robert E. Lee’s Army of Northern Virginia is coming down.

In the shadow of the Charleston church shooting, photos surfaced of the alleged mass murderer waving the Confederate flag around, sparking a instantaneous movement to take down the flag.

For most Americans, the Confederate flag is associated with racism and slavery. It gained its modern popularity with the movement in the ’40s and ’50s to frustrate civil rights, often violently. Its defenders, in more recent years, have held tight to these roots with conviction in the mantra “heritage not hate”—an argument that has fallen on deaf ears after the Charleston massacre.

As President Barack Obama said in his eulogy for Rev. Sen. Clementa Pinckney, one of the nine victims in the massacre at Emanuel AME Church, “Removing the flag from this state’s capital would not be an act of political correctness. It would not an insult to the valor of Confederate soldiers. It would simply be acknowledgement that the cause for which they fought, the cause of slavery, was wrong.”

The momentum of removal is building. Here are the places where it has been removed so far. Given how fast this trend is moving, this can hardly be considered an exhaustive list.

Arguably the biggest news surrounding flag removal has been in South Carolina, where the shooting occurred. Although South Carolina Gov. Nikki Haley has “called” for the removal of the flag, this cannot be effected unless two-thirds of the state legislature votes to do so.

Despite Amazon, Walmart, eBay, and Sears (along with the Sears-owned Kmart stores) taking out the Confederate flag and flag-decorated merchandise, some of these retailers are being criticized for still selling merchandise decorated with the swastika.

The gift shops in National Parks Service parks, battlefields, and national monuments are ridding themselves of out Confederate “stand-alone” flag-themed merchandise. This includes Civil War battlefields at Chickamauga and Chattanooga National Military Park in Fort Oglethorpe, Georgia, and Point Park on Lookout Mountain in Tennessee, as well as Antietam Battlefield in Sharpsburg, Maryland. Eastern National, a major non-profit concessionaire serving 160 national parks, including Ft. Sumter, the first battleground of the Civil War, is removing flag products from all of its stores.

Union County officials in Monroe, South Carolina, removed the small flags posted in the ground around the local Confederate monument.

Virginia governor Terry McAuliffe has given Virginia drivers 120 days to change their plates if they drive cars with a specialty plate given to Sons of Confederate Veterans.

Apple has reportedly disqualified all apps and games that feature the flag, including Ultimate General: Gettysburg and Hunted Cow. As Tasos Lazarides of Touch Arcade noted, “Apple is famous for reaching for the axe rather than the scalpel.” Many of these games are set during the Civil War.

In possibly the oddest move in this story, Warner Brothers has ended production of the “General Lee,” a toy replica of the ’69 Dodge Charger from the 70s TV show, “The Dukes of Hazzard.” They will also cease licensing any Dukes products like T-shirts and posters featuring the flag.

South Carolina’s Citadel is one of America’s premier military schools, on a par with West Point. Leaders there have voted to remove the Confederate Naval Jack from The Citadel’s Summerall Chapel. For this to happen, state legislators will have to amend the South Carolina Heritage Act. And even if they do, the flag will be relocated, not removed altogether.

Rev. Gary Hall, dean of the National, has called for the removal of stained glass featuring the Confederate flag. These panes were installed as an effort at reconciliation in the early 50s. They become symbols of discord instead.

If you have a cynical stripe at all—or have seen how gun legislation scares work—you won’t be surprised to learn that this movement has inspired a run on flags and flag-related merchandise.

Can there be any doubt that a lot of these flag removal actions are a result of the horror and regret people feel at the murder of the Charleston church goers? But you’d have to be a bit of a Polly Anna to believe that a multinational retailer is inspired by the same things as a state rep or local grocer who sits on the school board.

But then again does it matter what the inspiration is as long as the outcome is a society facing up, in however minor a manner, to the mess it’s made?