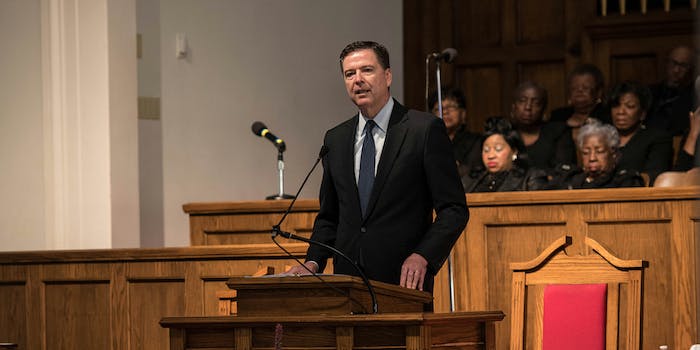 Comey to publicly testify before Senate Intelligence Committee next week

This will be must-watch television.

The testimony will be Comey’s first public remarks since being fired by Trump amid the FBI’s ongoing investigation into ties between Russia and the Trump campaign and whether Russia interfered in the presidential election.

Comey will first testify publicly before a closed session with lawmakers at 1pm ET on Thursday afternoon.

While Comey is not expected to get into specific details of the ongoing FBI investigation, he should be able to discuss interactions with Trump that led up to his firing—including Trump’s alleged request for him to drop an investigation into former National Security Adviser Michael Flynn and another instance where Trump allegedly asked for Comey’s “loyalty.”

Comey’s testimony will be somewhat of a watershed moment in the ongoing probe into Russian interference in the 2016 election and ties to Trump’s campaign. Once Comey was fired, a frenzy of leaks came out about Trump’s treatment of the former FBI director and other Russia-linked events that occurred in the White House.