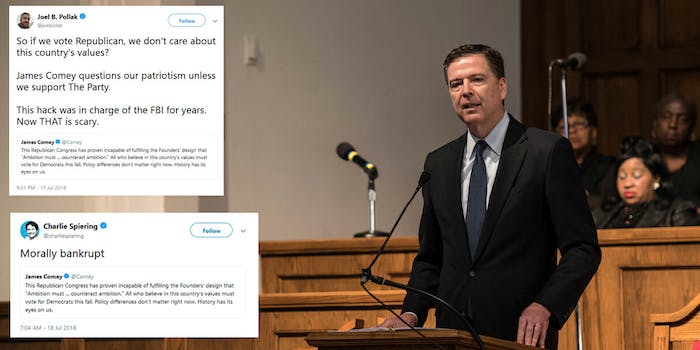 James Comey accused of election ‘meddling’ for tweeting about voting

To be fair, Democrats weren't thrilled either.

A number of tweets from former FBI Director James Comey about President Donald Trump and the upcoming 2018 midterm elections are drawing ire from conservatives online.

Earlier this week, Comey commented on President Donald Trump‘s recent press conference with Russian President Vladimir Putin, joining a chorus of people criticizing him for refusing to condemn the country’s alleged interference in the 2016 election.

The tweets were par for the course, as Comey has repeatedly criticized Trump in the past after the president abruptly fired him, sparking the appointment of Special Counsel Robert Mueller.

However, a tweet on Tuesday seems to have irked conservatives online the most. Comey, a registered Republican, called for Americans to vote for Democrats during the midterms.

“This Republican Congress has proven incapable of fulfilling the Founders’ design that ‘Ambition must … counteract ambition,'” he wrote. “All who believe in this country’s values must vote for Democrats this fall. Policy differences don’t matter right now. History has its eyes on us.”

This Republican Congress has proven incapable of fulfilling the Founders’ design that “Ambition must … counteract ambition.” All who believe in this country’s values must vote for Democrats this fall. Policy differences don’t matter right now. History has its eyes on us.

The tweet sent several conservatives online into overdrive, with hyper-conservative website The Daily Caller running the headline: “Comey Meddles in 2018 Election,” a joke over the accusation that Comey tried to influence the outcome of the 2016 election.

The website pointed out that Comey has faced some criticism in recent months, including the Department of Justice Inspector General report and his handling of the case surrounding Hillary Clinton’s email server.

So if we vote Republican, we don't care about this country's values?

James Comey questions our patriotism unless we support The Party.

This hack was in charge of the FBI for years. Now THAT is scary. https://t.co/GtraKQnWgQ

BUT NO BIAS HERE FOLKS https://t.co/K29lcquzXF

Meanwhile, r/The_Donald, a fervent pro-Trump community on Reddit, did not take Comey’s tweet lightly, with one post claiming he is a “Democratic operative who weaponized the FBI for political reasons.”

Another post about the tweet accused him of being part of the “Deep State on the run.”

But conservatives weren’t the only ones who weren’t thrilled with the former FBI director’s plea for people to vote for Democrats this fall.

Even liberals didn’t want his endorsement.