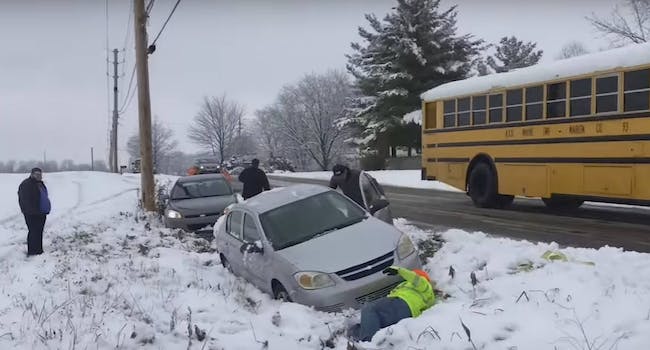 The Xfinity repair truck parked at the bottom of an icy hill, creating a dangerous situation.

How many car wrecks do you need to cause before you care? That’s the question the internet is asking a group of Comcast repairmen in Indianapolis after six people wrecked or slid off the road trying to avoid a truck that the workers parked at the bottom of an icy hill.

The truck effectively closed one lane of a two-lane road, and was positioned immediately after a blind spot.

Over the course of four minutes, you can see four cars run off the road trying to avoid the Comcast truck, and another two get in a wreck that nearly sends a pickup truck into someone’s home. Neighbors scramble to warn drivers as they come over the hill, only to have to avoid them as they try to dodge the Comcast truck parked in the middle of the street.

The repairmen refused to put traffic warnings at the top of the hill. When asked about the lack of street cones around their truck, they said they were only required to have one per 10 miles of the speed limit. Throughout the video, the repairmen insult the neighbors begging them for help, keep saying “I’m just doing my job,” and show no concern for the numerous wrecks piling up around them.

You can watch the chaos for yourself below.

Comcast has issued the following statement about the incident from Ed Marchetti, SVP, Technical Operations:

When I watched this video, I was very concerned by what I saw.  Our employees should always protect people and treat them with respect no matter what the situation. Safety matters most – especially in dangerous weather conditions like this.

We are actively investigating what happened when our technicians were on site to restore services during an outage, and we will reach out to those who were impacted by this incident.

Within the next 24-48 hours, my team leaders will meet with our technicians across our company to use this as an example of how important it is to make everyone’s safety a priority in everything we do.

And just as important, there’s no place for disrespect – treating people the right way is the only way to work.

According to OSHA standards, the workers were not following proper safety guidelines at the time of the incident.