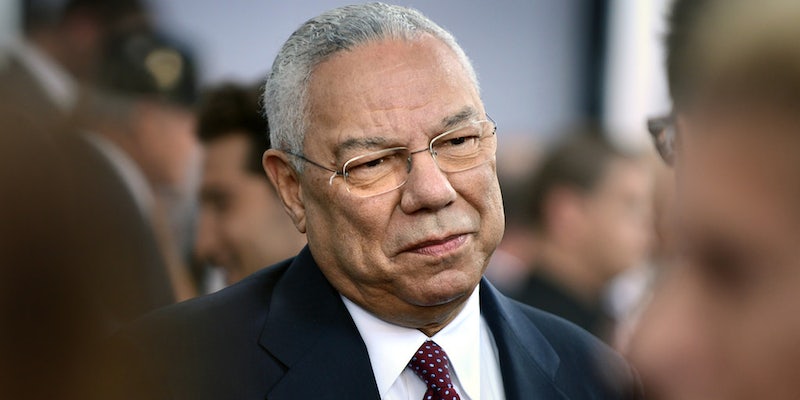 Like similar messages sent to former Secretary of State Hillary Clinton—whose use of a private email server while in office has generated significant controversy for her presidential campaign—the sensitive information sent to Bush officials was not marked as such at the time they received it. Furthermore, none of the information came from the intelligence community.

Two of the emails were sent directly to Powell, who served as secretary of state during Bush’s first term, while the other 10 went to senior aides to Rice, who succeeded Powell in Bush’s second term.

The revelation came in a letter from Steve Linick, the State Department’s inspector general, to Under Secretary of State for Management Patrick Kennedy.

A State Department spokesman declined to comment on the Bush-era emails at a press briefing on Thursday.

Powell said that the information contained in the messages was harmless and did not merit retroactive classification.

“I wish they would release them,” he told NBC News, “so that a normal, air-breathing mammal would look at them and say, ‘What’s the issue?’”

Clinton, too, has complained about retroactive classification by Linick’s office—in particular, his decision to mark her emails about the CIA’s technically covert but publicly known drone program with a special form of top-secret designation.

“In at least one case, the emails appear to involve information from a published news article,” Clinton campaign press secretary Brian Fallon said in a statement released at the time. “This appears to be over-classification run amok. We will pursue all appropriate avenues to see that her emails are released in a manner consistent with her call last year.”

The House Oversight Committee has been investigating national-security concerns surrounding Clinton’s private email server. Rep. Elijah Cummings (D-Md.), the top Democrat on the committee, used the revelation of similar Bush-era incidents to highlight his frustration with the investigation.

“My concern has been that Republicans are spending millions of taxpayer dollars singling out Secretary Clinton because she is running for President—often leaking inaccurate information—while at the same time disregarding the actions of Republican Secretaries of State,” Cummings said in a statement. “Based on this new revelation, it is clear that the Republican investigations are nothing more than a transparent political attempt to use taxpayer funds to target the Democratic candidate for President.”

In a statement released on Thursday, Clinton campaign chairman John Podesta echoed Cummings’ observations about the similarities between Powell’s situation and her own.

“This announcement about Secretary Powell’s emails shows just how routine it is for government bureaucrats to go overboard when it comes to judging whether information is too sensitive for the public to see,” Podesta said. “Hillary Clinton agrees with her predecessor that his emails, like hers, are being inappropriately subjected to over-classification. She joins his call for these emails to be released so that the public can view the contents for itself.”

After news first broke in March of Clinton’s private email account, the State Department began a review of past secretaries’ email use. That review turned up the 12 sensitive emails in Powell and Rice aides’ inboxes, and Linick said in his letter to Kennedy that he suspected there were many more such emails awaiting discovery.