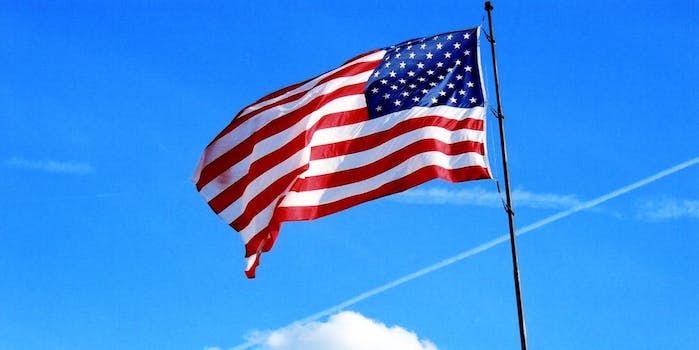 It's the little things that make all the difference in the land of the free and the home of the brave.

In the midst of a heated presidential election, it’s easy to forget the simple gestures that make America great right now.

Dotson, an 18-year-old senior at Continental High School in Continental, Ohio, took the Internet by storm this week after a photo of him holding his school’s American flag off the ground went viral.

“When your son calls his grandmother and says he has a problem….it’s usually not good,” Rhonda Ordway Pester, Dotson’s mom, wrote on Facebook on May 22. “This is where she found him this morning. The flag fell to the ground, he saw it, stopped and held it until someone from school could come and put it back up.”

The photo, which has been shared more than 40,000 times, prompted an outpouring of gratitude for Dotson and praise for Ordway Pester’s parenting.

The U.S. Flag Code dictates that “[t]he flag should never touch anything beneath it, such as the ground, the floor, water, or merchandise.” Federal law also specifies fines and imprisonment for intentionally desecrating the flag, though the Supreme Court ruled in 1990 that state and federal laws protecting the flag violate the First Amendment.

According to Ordway Pester, Dotson, who serves as Continental High School’s senior class president, learned proper flag etiquette from his time in the Boy Scouts.

Dotson appears to have a strong interest in the U.S. Marine Corps, according to his posts on Facebook, though he did not respond to the Daily Dot’s questions about his post-graduation plans.

Those who know Dotson say his treatment of the flag aligns perfectly with his character.

“Something like this wouldn’t be out of the ordinary for Cole,” Joel Mengerink, superintendent of the Continental school district, told CNN. “He takes great pride in our country and he knows how to show proper respect to the flag.”