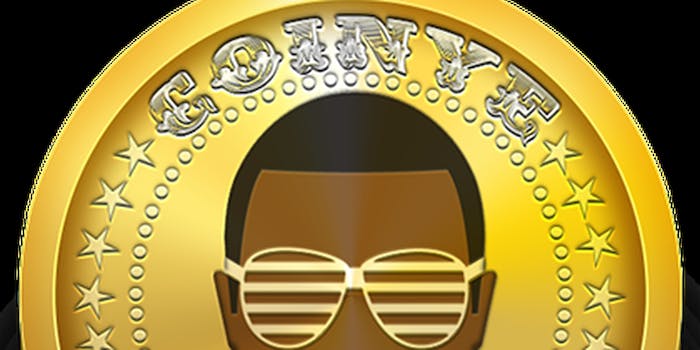 No one digital currency should have all that power.

Bitcoin is so 2013. Forget Litecoin and Dogecoin, too. There is a cryptocurrency debuting on January 11 called Coinye West, named after Kanye West. Happy 2014!

If you’re wondering what the hell a cryptocurrency is and why there’s one named after Kanye, the second answer is a giant cosmic shrug. The first answer is cryptocurrency is the name given to digital mediums for exchanging money. Bitcoin was the first fully implemented system, and it’s by far the most well-known, as it spent 2013 gaining mainstream recognition (only to see its value plummet at the year’s end after the Chinese government kiboshed its use there).

In addition to Bitcoin, there’s Ripple, Litecoin, Peercoin, Namecoin, and around 70 others—including Dogecoin, a currency derived from Litecoin that has far surpassed it in terms of media attention, thanks to being named after the Internet’s favorite Shiba Inu.

(There are cryptocurrencies with stupid names like Sexcoin and Fedora Coin, but they lack that of-the-moment memeness that prompts media recognition, so phooey on them.)

Coinye West is a cryptocurrency that will operate similarly to Bitcoin, but it has a far more PR-grabbing epithet, because apparently all future cryptocurrencies will be given precious novelty names a la Dogecoin. I have seen the future and it is money named after Internet ephemera and celebrities.

No premine, no screwed up fake “fair” launches, shyster devs, muted channels, and f**ked up wallets. We will be releasing password protected, encrypted archives containing the binaries and source for the wallet and daemon BEFORE LAUNCH, with the passwords to be released at the specified time. We will work with multiple pools to orchestrate a PROPER and FAIR release.

In an interview with Vice, the creators declared Coinye “a cryptocurrency for the masses.” They appear to still be tweaking certain aspects of the currency, since the maximum number of coins was initially reported as 66,666,666, and now it’s 133,333,333,333. The creators, who wish to remain anonymous, plan to release a mining program called CoinyeMiner that will make it easy for people to mine their coins.

I thought Coinye was a total publicity gambit by bored developers until I read the Vice interview bit about CoinyeMiner. The development of a program like this could give the Coinye currency a substantial distinction, beyond a rapper-inspired name. And taking the time to create a novelty cryptocurrency would be one thing, but the additional effort required to create a “Mining for Dummies” program makes it seem like it’s way too elaborate to be a frivolity.

I got in touch with the Coinye creators, who elaborated on their plans to make mining simple. “We’re working with the community,” they said over email. “A Twitter user suggested ‘Gold Digger’ for mining Coinye coins so we’re running with that and working on making it easy to mine coins by the click of a button.”

I asked if the Coinye project had other goals. “People who have Bitcoin hoard it and see it as an investment and not as currency anymore,” they wrote. “The goals are to make cryptocurrencies more accessible to the public. We want to use the Coinye West for things music related. Hip Hop stores are emailing us and asking to be the first to accept Coinye West coins.”

So Coinye is serious about the endeavor, and they’ve hit on an interesting concept: niche currencies. Just as the Euro is liquid in Europe but much harder to spend in the U.S., the idea of a digital currency with more value to a certain subset of users determined by common interest instead of national divides is a fascinating concept.

Of course, making a cryptocurrency too easily accessible to people who don’t really know what they’re doing could lead to huge heists and rip-offs from people who can exploit the system, since Coinye, like other cryptocurrencies, is unregulated.

They haven’t gotten Coinye endorsed by the original Ye, but they’ve made an offer to give Kanye 100,000 Coinye coins. Will Kanye respond?

If any celebrity is an appropriate candidate for having a currency named after him, it’s Kanye. He’s often misunderstood, just like the idea of cryptocurrency. He’s ambitious enough to make the idea of developing a radically decentralized power exchange feasible. And Wall Street bros are obsessed with him despite underlying ideological differences, just like Bitcoin.

Part of Kanye’s appeal is that he explores, elegantly in his art and abrasively in his media appearances, the way feeling undervalued damages the psyche on an individual and collective level. So it’s all too appropriate that a cryptocurrency that could easily be dismissed as a joke but actually contains some thoughtful ideas about taking digital currencies to the mainstream is named after Yeezus himself.