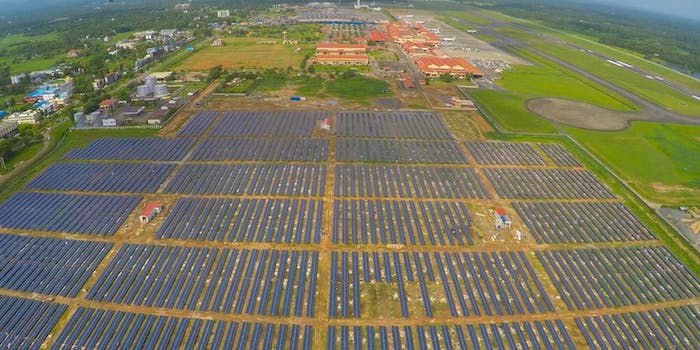 India is home to the world’s first solar-powered airport

Book a flight to Cochin International Airport, where it's no big deal to leave the light on.

You are now free to move about the power plant.

Achieving solar sustainability for the country’s fourth-largest airport was no mean feat. Calcutta-based Vikram Solar installed 46,150 solar panels over 45 acres to harness enough sunlight to keep the planes coming and going. The panels generate 12 megawatts of electricity, much more than the airport’s former 1-megawatt system, which the airport subsidized with conventional energy usage. This new setup generates more power than the airport needs, and it feeds the surplus back into the electrical grid for the Indian state of Kerala.

According to a statement issued by the airport, this heavy-duty solar system will prevent 300,000 tons of carbon dioxide emissions from coal-fired power plants from entering the atmosphere over the next 25 years. The airport’s photovoltaic panels will yield the benefits of “planting 3 million trees or not driving 750 [million] miles” in that same timeframe.

The city of Cochin, also known as Kochi, is home to 600,000 on India’s southwest coast. With about 300 days of bright and clear sun a year, India is uniquely situated as a solar energy powerhouse: If you could hypothetically cover all of it in solar panels, the sunlight would generate five exawatt hours of electrical energy, a gigantic quantity perhaps better expressed as 5,000 trillion kilowatt hours.

India is increasingly reliant upon imported fossil fuels to keep up with booming demand, so the country is motivated to be a leader when it comes to alternative sources of energy.

If the Cochin International Airport project is any indication, India could quickly become a literal powerhouse in the solar arena. Fasten your seatbelts.