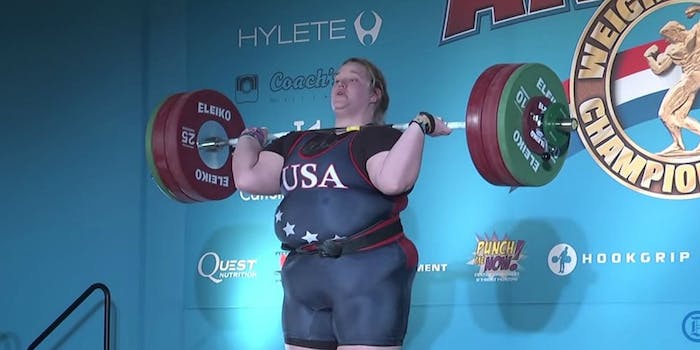 How the Coach's Eye app has made life easier for the Olympic weightlifter.

Before she became a weightlifting star, Holley Mangold played football. During her 12 years in the sport, Mangold watched plenty of film, analyzing her technique and trying to make herself into a top-notch high-school athlete. It was the most central and immediate way to get better.

But Mangold is a weightlifter now, and in that clean-and-jerk world, finding a way to work with game and/or practice film hasn’t been so easy. Until now.

“I had 12 years of football, and you always had that coach with the pointer in the film room telling you that you should have gone this way when instead you went that way,” Mangold told the Daily Dot. “But with weightlifters, you’re usually not around the coach you want to be around. It’s still a small sport.”

Coach’s Eye—the phone and tablet app that allows a coach to make a telestrated video of an individual athlete or team and then resend that video to the subject as a learning tool—makes that sport a little bigger. Or, at the very least, a little more inclusive.

Because by using Coach’s Eye, Mangold can take lessons from the coach, Drew Dillon, she’s worked with for so long. She can hear his voice as he critiques her form. She can watch as Dillon draws instructions on the film. She can do it all using her phone or tablet, and Mangold doesn’t even have to be in the same country in order to improve her performance.

“For me, as an elite athlete, a lot of different travel happens,” said the 2012 Olympian, a former contestant on NBC’s The Biggest Loser and the star one of the better box jumps you’ll ever see who’s coming off a fifth-place finish in the +75kg category at Toronto’s Pan American Games in July.

“I’ve been at the Olympic training center (in Colorado Springs, Colorado), and now I’m at MuscleDriver (in Fort Mill, South Carolina), and there are very qualified coaches there. It’s not a lack of coaching. But to have someone who I’ve been working with and who knows what my tics are, it’s huge.”

Mangold can send her video to Dillon and, in return, see something like this.

Or this, where Dillon can instruct Mangold in a personal way, even if the two are thousands of miles apart.

“It’s not difficult to see what’s going on [in a remote video], but it is difficult to explain it to them,” Dillon, who’s worked with Mangold since 2010, told the Daily Dot. “The best remote situation to be in is an athlete that has already gotten to work with you in person. It’s really easy to give cues to Holley and remind her of things we’ve talked about in the past.”

Only since the app, which can be used for iOS and Android devices, launched in 2011 has a coach like Dillon had the chance to work remotely with an athlete like Mangold in this way. Before Coach’s Eye was available, the equipment needed to create practice film for weightlifters to study was expensive and somewhat unreliable. Coaches would have to set up on-location cameras at different angles and a TV to watch the video, and after the lifter completed the attempt, everybody would have to wait 30-40 seconds before the replay would filter across the TV screen.

If the coach and the athlete weren’t in the same location, it was an impossibility.

But with Coach’s Eye, all a coach and his athlete need are a phone, an Internet connection, and the ability to point your hand at whatever you want to record.

As the website explains, Coach’s Eye and its pricing options provide, “High frame rate HD video recording, precise video review, slow motion playback, side-by-side comparison, audio voice over, [and] video telestration tools.” After reviewing the performance and breaking it down, the coach can either email or text the new video directly to the athlete or can upload it to Facebook, Twitter, or YouTube.

For Mangold, her career before Coach’s Eye was a study in inconsistency and spending valuable training time correcting herself.

“One of the problems I always had when I went out to the Olympic training center is that it was a different atmosphere,” Mangold said. “My technique would always slide. When I would get back, Drew would have to work with me, and I’d have to fix this and fix that. It would be frustrating. My technique would always revert back. Now I have no worries, because Drew can tell me what’s going on. It’s huge not having that one or two weeks where you have to readjust.”

Coach’s Eye isn’t simply for weightlifters. Baseball players can use it. So can football, hockey, and basketball players. It’d be good for golfers and tennis players, and boxers could find better ways to play their craft with the app.

“I remember when I was a kid playing baseball, and I would swing a thousand baseballs off the tee and I would still be doing the same thing wrong,” Josh Carrasquillo—a marketing associate for TechSmith, the maker of Coach’s Eye—told WJBK earlier this year. “If somebody would’ve just been able to show me on their mobile device what I was doing wrong, I would’ve been able to correct it right there.”

Mangold can understand the feeling. Ultimately, though, Mangold simply wants peace of mind just before she begins a competition. That’s why before the Pan Am Games, she sent Dillon video of her warmups of the clean and jerk. It was simply nice to hear his positivity.

Said Mangold: “It’s reassuring just to hear him say, “Everything’s looking great.’ … I’m a very visual learner. Before I used Coach’s Eye, I would send videos and I would have Drew just tell me on the phone what he thought was going on. The first time we used Coach’s Eye, he texted me, it had the video, and I said, ‘Oh my God, you’re talking in the video.’ It was quite awesome.”

Screengrab via The Columbus Dispatch/YouTube